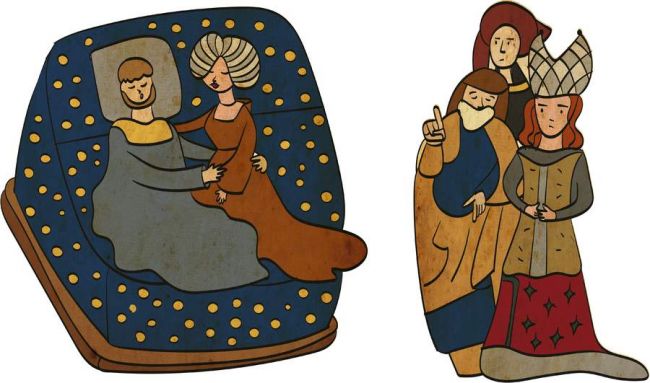 Every age has a tendency to look back at older generations and judge the customs, beliefs and traditions of the time. However, it is fair to say that there are few periods in history that we regard as strangely as we do the Middle Ages.

The Middle Ages have been stamped an unlucky time to be born and popular consensus is that people were poor, food was dull, everything was dirty, and for the vast majority of it the population was dropping like flies. What we don’t hear about is that people created some of the most peculiar, bizarre, hilarious and astounding trends in human history. Let’s take some time to embrace the medieval period and all of its lovable eccentricities.

Life in medieval times could be tough, and this didn’t just apply to humans. Just like their two-legged owners, all manner of animals from livestock to insects were put on trial if suspected of breaking the law. There are records of at least 85 animal trials that took place during the Middle Ages and the tales vary from the tragic to the absurd, as described in the book “The Criminal Prosecution and Capital Punishment of Animals,” by E. P. Evans (E. P. Dutton and Company, 1906).

By far the most serial offenders were pigs, accused and convicted of chewing off body parts and even eating children. Most were found guilty and sentenced to death by hanging or being burned at the stake. In 1386, a convicted pig was dressed in a waistcoat, gloves, drawers and a human mask for its execution.

It wasn’t just pigs that felt the sting of the law, though, In 1474 a court found a rooster guilty of the “unnatural crime” of laying an egg; unwanted rats often found themselves on the receiving end of a strongly worded letter, asking them to leave the premises; and curiously enough, there was a trial of dolphins in Marseilles in 1596.

However, not all of the trials ended in brutality. One donkey, which found herself the victim of unwanted sexual advances, was proclaimed innocent after a strong recommendation from a convent’s prior, declaring her to be a virtuous and well-behaved animal.

Clothes were hugely important to the medieval elite, as it was a way of displaying their wealth and overall superiority over the poor. Because of this, various unusual fashion trends swept through Europe, such as long, pointed shoes for men, as described in the book “Encyclopedia of Society and Culture in the Medieval World” (Facts of File, 2008) by Pam Crabtree. The longer the shoes were, the greater the wealth of the wearer and hence the social rank. Some of the shoes were so long they had to be reinforced with whalebone.

Late 14th century men were keen to show off their bodies in saucy and revealing clothing, and would wear dangerously short tunics with tights. This trend was followed by the codpiece — a pouch attached to the front of men’s trousers, shaped and padded to emphasise their masculinity.

Much of what people assume about medieval upper-class marriage is true — it was rarely for love, but rather for political and social gain, according to Conor McCarthy’s book “Marriage in Medieval England” (The Boydell Press, 2004). And women, as in almost all aspects of medieval life, had no say. In fact, men and women were judged as ready for marriage as soon as their bodies reached puberty, as young as 12 for girls and 14 for boys.

However, the marriage ceremony as we know it today was very different. For a start there wasn’t a formal ceremony until much later and couples didn’t need permission to marry. They could do it in a matter of moments by uttering consent, which led to marriages in the street, down the pub or even in bed. This meant it became rather hard to prove people were actually married, so in the 12th century it was declared a holy sacrament that must be observed by God.

And it wasn’t just the marriage that had to be observed. The consummation, especially among upper-class newlyweds, was far from private. It wasn’t unusual for the bride to be carried to the bed by her family. The act of “bedding” was not regarded as an intimate moment, but rather an act of investment in the union, and one that warranted being observed by witnesses. Some couples had their blushes spared by the luxury of a bed curtain, but this was not the case for everyone, and the observers would instead wait around the room for the act to be “completed.”

As mentioned, most upper-class medieval marriages were often loveless husks designed purely for financial and social gains. Therefore, in order to not throw themselves into the nearest bog, medieval nobles fulfilled their romantic desires in “courtly love.”

Undertaken, not surprisingly, by members of the courts, courtly love allowed lords and ladies to practise the elements of love regardless of their marital status, explained Pamela Porter in her book “Courtly Love in Medieval Manuscripts.” This involved the risqué actions of dancing, giggling and even holding hands. Sex, however, was strictly forbidden, and reserved for one’s spouse only. Courtly love was so popular, a list of rules was written up including: “Marriage is no real excuse for not loving.”

Couples in medieval Germany didn’t waste time when it came to solving their disputes. Rather than just arguing like any normal couple, they took to the ring. Trial by single combat was a popular way to solve disagreements, and when man and wife were fighting there were bizarre restrictions, for example the husband must stand in a hole with a hand behind his back, while his wife ran around with a sack filled with rocks.

While today many women spend money to accentuate their eyelashes, it was completely different in the Middle Ages, according to Margaret Schaus’ book “Women and Gender in Medieval Europe an Encyclopedia,” (Routledge, 2006).

Because the forehead was seen as the central point of their faces, women would remove their eyelashes and eyebrows in order to accentuate it. Some were so committed, they would pluck their hairlines to achieve a perfectly oval, bald face.

People in the medieval times were very preoccupied with death, which is understandable if you consider how pious society was at the time and also the fact that many people were falling victim to the Black Death. As a result, a trend known as “ars moriendi,” or “The art of dying” came into fashion.

The idea revolved around dying a good Christian death, according to the book by Austra Reinis called “Reforming the Art of Dying” (Ashgate, 2007). The death should be planned and peaceful. Just to add further stress when you’re about to pop your clogs, the dying person should, like Christ, accept their fate without despair, disbelief, impatience, pride or avarice. Dying well was particularly popular with the priesthood, which led to many of the infamous medieval paintings of monks and holy men accepting their brutal murders with calm serenity.

If you thought professional sports hooligans were a modern phenomenon, think again — medieval England had sports-related mob violence before the sports were even named, according to Montague Shearman’s “Football History” (Longmans, Green, and Co., 1901).

What we regard today as soccer (or football as it’s known outside the U.S.) was violent, chaotic and even deadly. It involved an infinite number of players, could take part across entire villages and often it wasn’t the ball being kicked, but the opposing team. One rule book for “Shrovetide football” lists that any means could be used to score, save actual murder. In 1314, King Edward II decided enough was enough and forbid the game, decreeing, “on pain of imprisonment, such games to be used in the city in future.” Clearly he was more of a golf fan.

If medieval people loved two things it was mythology and religion, and these two often combined in a very peculiar way. Due to a mistranslation of what was likely intended to be an ox, people commonly believed that the Bible likened Jesus to a unicorn, according to “Book of Beasts: The Bestiary in the Medieval World” (J. Paul Getty Museum, 2019) edited by Elizabeth Morrison.

Medieval folk ran with this idea and the unicorn, or whatever they believed to be a unicorn, repeatedly cropped up in religious medieval art. As only innocent maidens were allowed to touch unicorns, the unicorn was also used as a strangely uncomfortable allegory of Christ entering his mother’s womb.

Being a jester in the Middle Ages may seem a terrible fate — after all, their hats were modelled after the ears of an ass. But jesters were also granted unique privileges, according to Beatrice K. Otto’s book “Fools Are Everywhere: The Court Jester Around the World” (University of Chicago Press, 2007).

As everything that came out of their mouths was by royal decree, to be taken in “jest,” they could get away with slandering the lords and ladies of court, and voice their political opinions in a time when doing so was strictly forbidden. Being funny pays, even in the medieval court.

If you were a poor person in the Middle Ages, food, for the most part, was dull, boring and repetitive. However, for the rich, nothing was off limits, as explained in Terence Scully’s book “The Art of Cookery in the Middle Ages” (BOYE6, 2005). They enjoyed dining on swans and, to keep them going through lent, beaver tail.

However, they were munching their way through so many animals they were forced to create new and more-bizarre ones. A favourite of the table was the helmeted cock — prepared by stitching a rooster so it seemed to be riding atop a pig.

Many people of medieval Europe joined together at the beginning of January to celebrate the Feast of Fools. This eclectic event, like most Christian festivals, was inspired by a pagan festival — Saturnalia — and turned the status quo on its head, according to “Sacred Folly: A New History of the Feast of Fools” (Cornell University Press, 2011) by Max Harris. The highest respected officials swapped with the lowest, serving maids became masters and a king of misrule was crowned.

Although originally intended to be confined only to the hallowed halls of churches, the common people took it upon themselves to celebrate. There were parades, comic performances, costumes, cross-dressing, bawdy songs and, of course, drinking to excess.

Not entirely related but equally as difficult to comprehend, was the Festival of the Ass, where a young girl carrying a child would ride a donkey into church, and throughout the service the congregation replaced “amen” with a “hee-haw.”

Considering the celebration was held in super-strict Christian medieval Europe, it’s impressive it survived for so long. However, over time the rules were tightened, certain acts forbidden and the final nail in the coffin of fun came with the Protestant reformation, which condemned all the enjoyable excess.

How Many Hidden Numbers Can You Find In This Puzzle?