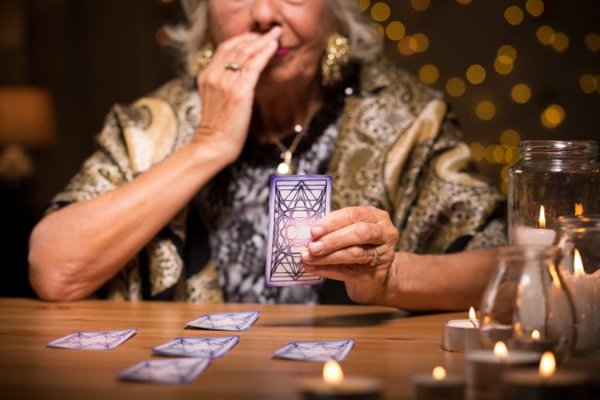 Would you want to hear your fortune?

For some, there’s something enticing about the idea of having a psychic predict the future. If you knew your fate, or got some crucial insight, perhaps your life would seem more manageable — and the future less scary.

Of course, experiences vary. Some mediums and Tarot readers spend hours studying their craft, while some charlatans have figured out a way to make a quick buck with a few tricks and some flair. And then there are those who believe all of us are a little “psychic,” whether we realize it or not.

We asked the Huffington Post newsroom to anonymously share their stories of encounters with psychics — and the results ranged from intriguing, to bizarre, to uncanny. Read their stories below.

Neckties In The Closet

A year and a half or two years after my father died I interviewed a medium for a story. After the interview we had lunch and he asked if I wanted a reading. I agreed and told him that for the most part, I wasn’t going to confirm or deny anything he said. I didn’t tell him about my father dying (though he was somewhat of a public figure, so definitely Google-able).

As he began the reading, he told me that a short chubby woman with red hair was there and she kept saying “Ethel, Ethel.” My grandma was a short chubby woman with red hair that looked JUST like Ethel Merman. A bit further into the reading, the medium said, “There’s a man with Ethel and he has a message for you. He wants you to tell Ruth that he loves her.” Little did the medium know that my mom and dad had been married for 35 years when my dad died and they were the most madly in love people I’ve ever met or that my mom’s middle name is Ruth and he always called her “Ruthie” (and he was the only one — everyone else called her by her first name). I was shocked.

With the hairs on my neck already standing on end, the medium said, “There’s more. He wants you to tell her that she can get rid of his neckties now. Does that make sense?” And I was stunned. I responded, “Yes. Even though it’s been quite some time since he died, she hasn’t been able to bring herself to get rid of his clothes yet.”

I called my mom after the reading and told her what the medium had said about my father (supposedly) saying he loved her. She was crying when I said, “Oh. And you still haven’t gotten rid of his clothes have you?” She said, “Well, actually, I didn’t tell you but I finally cleaned out his closets and took everything to Good Will two weeks ago.” I said, “That’s so weird — the medium said that ‘dad’ said you could get rid of his neckties now. It was time.” My mom began to cry even harder and said, “The only thing that I kept was his neckties. They’re still in his closet.”

There’s no way the medium could have known that — I didn’t even know that. For Christmas that year my mom gave my two brothers and me quilts made out of his neckties.

I went to a palm reader my first month of college with two friends. She told me she thought I’d be a journalist, which at the time I thought was a swing and a miss — I had no intention of writing professionally. She also told me that there were two men, one who wanted to hold on to me but I wanted to pull away, and another that I wanted to be closer to. (I was still getting calls from a guy I’d dated for like a week at the end of high school, and I had a HUGE crush on my best guy friend at college.) She told me if I pulled back from the guy I wanted and played it cool, things would work out. I followed her advice (I had, uh, previously confessed my feelings and had a really hard time hiding how emotionally wrecked I was that he didn’t reciprocate) and within a few weeks he was showing interest. We got together that fall and had a very turbulent but personally formative on-and-off relationship for the rest of college. Looking back she was really good at reading me. Better than I was, for sure.

My mom is very big into psychics and has read tarot cards since I was a baby. When I was in high school, she had a psychic over to the house, and the psychic told us I would break up with my then-boyfriend of a year (I was about 16) but the person I was meant to be with would pop up around the time I would be going to college. Naturally, I was devastated as a teen would be to hear they aren’t going to make it with their first love.

I broke up with my high school boyfriend at the end of my senior year of high school and started dating someone I had been friends with soon after. We married 7 years later.

“I Had The Power To Choose”

My first experience with a psychic happened while I was visiting a childhood friend at college. I remember entering his little shop and being taken to a back room. The psychic said that it looked like I had two love interests. He said that I needed to make a decision between the two of them, and he emphasized over and over again that I had the power to choose. That one came completely out of the blue. I had already been dating my current boyfriend for a few months by that time, and I felt very committed to him. It was only months later that I realized I was still carrying a lot of emotional trauma from a previous abusive relationship. I thought I’d gotten over it and moved on, but I hadn’t, and it was hanging like a cloud over my life and my relationship with myself and with other people. I hadn’t let go yet. I realized that I needed to take action on it somehow, that I had that power. So I started working with a therapist.

I once went to a psychic in Turkey who read coffee cups. He only spoke Turkish, but I had someone translate. He predicted I’d move out of state in 6 months, which I did and that I’d marry this guy I hadn’t seen in a really long time in 3 years. Soon after that, I started running into the guy randomly and we started spending a lot of time together. But the whole thing freaked me out and I questioned if my actions were following a self-fulfilling prophecy. I also really didn’t want to be married in 3 years time. And I really didn’t think I’d want to be married to him. In the end, things didn’t work out. The three year mark passed a little while ago and I can report that I did not marry him, or anyone else for that matter. I sometimes wonder if the fortune teller’s prediction caused me to alter my behavior in a way that changed that predicted path… Then I wonder if I’m reading into everything too much.

Ten years ago my wife was single, living in South Beach, working for a record label thousands of miles away from her family in New York. After grieving the loss of her grandmother, finding out that her label was shuttering and that she would soon be unemployed, she needed some answers… Hence the psychic. The psychic stated the following: You will soon have a new career path; you will soon meet your life partner; and you will have twins.

Within three months, she moved back to New York to be near her family; got a job at Billboard Magazine in advertising which was a stepping stone into many other great opportunities; we actually me when she was interviewing for that Billboard job. I was an assistant at the time and was summoned to pick her up for the interview where we struck up conversation fast. We were dating three months after she was hired; and in the summer of 2014, we had identical twin daughters. We were not surprised when the doctor told us.

I saw a psychic at a friend’s high school graduation party and let me tell you how truly LEGIT this lady was. She knew the city I was going to attend college in, she predicted that I’d work in the entertainment industry (what’s good, HuffPost Entertainment?!) She even specifically name-dropped a guy that I had a huge crush on at the time (yes, his name was Chris so it was mad generic) but he kissed me for the first time later THAT NIGHT! Many, many more specific details were dropped but you get the idea — I was blown away. I’m a believer.

I’ve never visited a psychic, but one day I was standing outside a restaurant and a woman came up to me and said I was pregnant with a boy. The very next month I found out I was pregnant. I had a girl, but for my first three ultrasounds I was told I was having a boy. It was eerie.

“He Was Able To Provide Clarity”

I went to my first tarot reading about a year and a half ago. I was a bit skeptical beforehand, but he was able to provide clarity and depict my life better than I could have thought possible at the time. I went after my grandmother passed away and he drew a card that he said expressed great sorrow. When I was frustrated with life in general, he accurately portrayed that I wanted to rush into more travel or make other hasty decisions while my mind wanted to slow down and make lists and think things through. Recently, the cards showed that I’d be in a lot of hardship and internal dilemma during winter, but after the cold of winter is over, it’d be much better. Spring is coming, guys.

What Does it Mean When You Dream About Someone

Test your knowledge of Philosophy