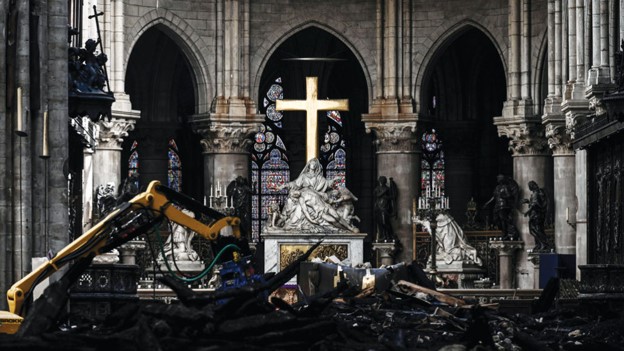 Researchers hope to study the building’s history, the medieval climate and more

After the April 15 fire at Notre Dame de Paris, rubble from the collapsed roof littered the floor, but many parts of the cathedral remained intact.

The “forest” of Notre Dame was one of Olivier de Châlus’ favorite places. That dense lattice of timbers under the building’s lead roof epitomized the medieval construction techniques that the engineer has spent years analyzing.

“There was a very special wood smell, very strong, coming from the Middle Age,” de Châlus says. “And it was very, very calm — impressive, compared to the very noisy life inside the cathedral.” As one of the few visitors allowed in the forest, de Châlus had the rare privilege of hearing the creaking noises emitted by the timeworn wood and peering at numbers scrawled on the timbers by long-gone carpenters.

That beloved forest is now gutted, lost in an April 15, 2019 blaze that destroyed the cathedral’s roof and spire and damaged parts of the masonry. De Châlus, who works for the global engineering firm Arcadis, is finishing a Ph.D. on the construction of the cathedral.

There’s little documentation of the building process, which began in 1163 and continued for about 200 years. De Châlus has devoted himself to teasing out the unwritten rules of construction — how builders decided the size of columns or the height of flying buttresses, for example. He notes that builders lifted 100-kilogram stones more than 60 meters off the ground without the benefits of modern technology. Exactly how this was accomplished has been lost to time, he says.

“Notre Dame is my life, my whole life,” says de Châlus, who spent four years supervising the guides that show tourists around the cathedral. So, after the fire, he quickly joined an international effort organized by French scientists to use their expertise to help rebuild the cathedral and learn more about the iconic building. He is now the spokesperson for the group, Association des Scientifiques au Service de la Restauration de Notre Dame de Paris — the Association of Scientists in Service of the Restoration of Notre Dame of Paris.

The fire has opened up access to parts of the building that could not be studied when the structure was intact. Scientists have come together with plans to research the history of the cathedral, as well as the fire’s environmental impact on the surrounding city. Some will even explore what the cathedral’s aged materials can reveal about climate change.

As the flames died out, Paris despaired at the damage to one of its most treasured historic structures. But “there’s much more to lose than what was lost already,” says archaeologist Maxime L’Héritier of Université Paris 8. If the materials that fell from the top of the cathedral — stone, wood, iron, lead — are not studied, he says, the opportunity lost is “even worse than what the fire has caused.”

The day after the fire, L’Héritier and art historian Arnaud Ybert of the Université de Bretagne Occidentale in Quimper, France, formed the association of scientists. Today, more than 200 scientists are part of the group, including geologists, archaeologists and engineers. The association aims to coordinate work among experts in various specialties, share knowledge and advocate for scientific study of the cathedral.

L’Héritier, who studies ancient metals, wants to know more about how iron was used in the structure, including its integration in the stone walls and the carpentry that held up the roof. While renovations in the 19th century added iron to the structure, the researchers will be searching for medieval iron placed during the original construction.

Researchers Lise Leroux, Aurélia Azéma and Maxime L’Héritier (left to right) are working on understanding the stone and metal within Notre Dame.E. CONOVER

Radiocarbon dating is commonly used to sort out the age of materials, but for that, the materials must contain some carbon. Luckily, medieval iron-production techniques introduced small traces of carbon, which, when alloyed with iron, make steel. Carbon dating those steel bits could demonstrate whether the metal is original, L’Héritier says.

And the iron, medieval or not, could act “like a thermometer,” revealing how hot the fire got, says Philippe Dillmann, an archaeometallurgist at the Centre National de la Recherche Scientifique, or CNRS. As temperatures rose inside the fire, the corrosion on the iron — essentially rust — would have transformed from typical rust into more unusual compounds. Analyzing that corrosion could indicate how much heat was inflicted on the building, and so could help scientists understand how much that heat weakened the limestone that makes up the bulk of the cathedral’s structure.

Dillmann is co-leader of a second effort to organize researchers to study Notre Dame, spearheaded by CNRS. The CNRS team will also plan scientific meetings and compile research.

Both groups are still in the planning stages because the cathedral is still contaminated with the toxic dust released when the lead roof burned. Most scientists do not yet have access to the building, and all the materials within must be sorted and cataloged before researchers can get their hands on them.

A third group of scientists is already on the scene assisting with the building’s cleanup and restoration. Researchers from the French Ministry of Culture’s Laboratoire de Recherche des Monuments Historiques, or LRMH, develop scientific techniques for restoring monuments throughout France.

The laboratory, located in Champs-sur-Marne near Paris, employs 23 scientists “for all the materials and for all the monuments in France,” says LRMH’s Lise Leroux. “We are very busy.” Even more so after the fire.

A geologist and expert in the conservation of stone, Leroux is helping to determine which of Notre Dame’s limestone blocks can stay in place or be reused, and which must be replaced with new stones. “The monument is very degraded,” she says. As the fire raged that night, the intense heat and the deluge of water from firefighting efforts caused cracking and other damage in the stones nearest the flames. And when the church’s spire collapsed, the impact punched gaping holes in the limestone ceiling.

Falling debris punched holes in the cathedral’s vaulted ceiling. Scientists are assisting with efforts to determine which of the remaining stones are damaged and need to be replaced.BRIAN KATZ AND MYLÈNE PARDOEN/CNRS

Finding stones to replace damaged or destroyed ones will demand great care. Placing stones of different compositions next to one another — for example, distinct types of limestone quarried from different parts of the world — can cause water or pollutants to accumulate in one stone more than another, weakening the structure.

Even before the fire, “the monument was very, very dirty,” says LRMH metals expert and chemist Aurélia Azéma. Now, LRMH researchers are devising and testing techniques for removing lead, which was strewn throughout the cathedral when the roof burned. Metal, stone, paint and other materials require tailored methods to extract the lead without causing damage.

Problems with lead extend beyond the cathedral walls. During the fire, extremely high temperatures caused the lead to aerosolize into small particles that billowed into the air and fell as dust nearby. That gave geochemist Sophie Ayrault, who studies toxic metals, a new project.

Ayrault, of the Laboratoire des Sciences du Climat et de l’Environnement in Gif-sur-Yvette, France, previously searched for metals in the sediments of the Seine, the river that runs through Paris. Analysis of sediment cores from the river’s floodplain reveals how contamination has varied over the last 100 years.

To pinpoint the origins of the lead she detects, Ayrault measures the relative concentrations of its isotopes — different versions of the element with varying numbers of neutrons in the nucleus. The ratios are a fingerprint that can be used to trace the contamination’s source.

After the fire, lead contamination near the cathedral mandated cleanup efforts (above). Researchers are measuring the isotopes of lead in samples taken from the Seine and other spots around Paris to tell which contamination came from the fire and which came before.FRANCOIS MORI/AP PHOTO

Before Notre Dame went up in flames, Ayrault had hoped to search the Seine’s sediments for runoff from Notre Dame’s roof — which, when intact, contained as much as 460 metric tons of lead, she says. But Ayrault hadn’t yet procured the roof samples she needed to discern its fingerprint. Now, to understand the fire’s impact, determining that signature has become more important.

After the fire, tests in parks and schools near the cathedral found lead levels high enough to endanger children. But it’s not clear if all of that lead was a result of the fire, or if some contamination predated it. To resolve that question, Ayrault aims to collect samples of melted lead and dust from the fire, as well as remaining intact parts of the roof. Then she’ll search for signs of that lead in future tests around the city.

The charred remnants of de Châlus’ beloved forest can also tell a story.

The oak trees that became the roof’s wooden frame grew during a hot spell in Europe known as the Medieval Warm Period, which lasted from the 11th century to the early 14th century (SN: 8/17/19, p. 6). Studying that wood could reveal details about that natural warming — such as how often droughts occurred — and may lead to a better understanding of what to expect from modern-day climate change, says Alexa Dufraisse of CNRS.

Dufraisse plans to analyze tree rings within the burnt timber. The width of the rings and the amounts of various isotopes found within the wood reveal the conditions under which the tree grew. That could include how wet or dry the climate was and the approximate geographic location of the forest.

The “forest” of Notre Dame held up the cathedral’s roof and spire. It was destroyed in the fire, but researchers hope to study the charred remains of the medieval oak beams to learn about climate change.F. EPAUD

She and colleagues also hope to learn how builders chose the trees and whether the forests were managed in some way. “This is a study that … could never have been conducted without the destruction of the structure by fire,” says Dufraisse, a dendroanthracologist, a scientist who studies tree rings within charred wood.

Other researchers are investigating less-tangible aspects of the cathedral, like its acoustics and its sociological significance. Anthropologists plan to interview people affected by the fire, including tour guides and musicians who’ve performed in the cathedral, to understand the psychological toll of the fire. “We all remember what we were doing when it was burning,” says molecular archaeologist Martine Regert of CNRS, who leads the CNRS group alongside Dillmann.

Regert compares the Notre Dame disaster to the 2018 fire in Brazil’s National Museum in Rio de Janeiro, in which millions of artifacts and preserved specimens were lost or damaged (SN Online: 9/7/18). In the Rio fire, “for me, we lost more” in terms of the scientific value, she says. Yet, emotionally, “I was probably more upset by Notre Dame.”

The cathedral holds an outsize place in the hearts of Parisians and people around the world. If another cathedral had burned, says de Châlus, there would have been less interest. Determining how to rebuild requires understanding our relationship with it, too, he says.

Subject to bouts of emotion himself, de Châlus says he cried when he first entered the cathedral after the fire. He felt an unfamiliar wind at his back, sweeping into the church and up through the holes where parts of the ceiling had collapsed. He says of Notre Dame: “It was much more than a church … much more than a study subject for me.”

What Your Food Cravings Really Mean

So Where Does Halloween Come From Anyway?