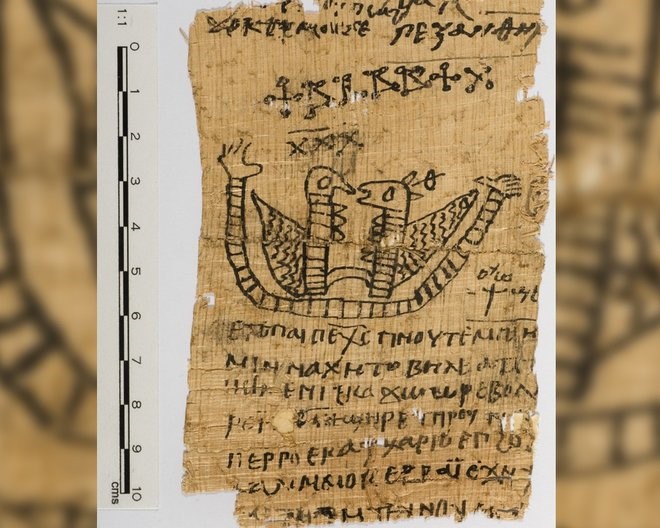 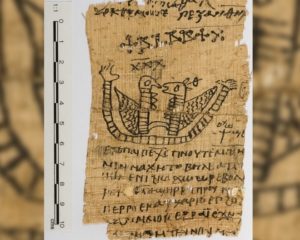 This ancient Egyptian papyrus, now at Macquarie University, is decorated with an image of two bird-like creatures. A magical spell written in Coptic, an Egyptian language that uses the Greek alphabet, is visible around the image.

An ancient Egyptian papyrus with an image showing two bird-like creatures, possibly with a penis connecting them, has been deciphered, revealing a magic spell of love.

“The most striking feature of [the papyrus] is its image,” wrote Korshi Dosoo, a lecturer at the University of Strasbourg in France, who published the papyrus recently in the Journal of Coptic Studies.

Dosoo estimates that it dates back around 1,300 years, to a time when Christianity was widely practiced in Egypt.

In the image, the winged creature on the left seems to be poking its beak into the open beak of its counterpart on the right — which also seems to have a nail through its head. A person’s outstretched arms surround the creatures.

Both creatures are connected through what Dosoo said could be chains, bonds or a penis. The creature on the right has two ears (or horns), and both creatures have what look like feathers or scales on the front of their bodies. The small differences between the two creatures may be an attempt to show sex differentiation, Dosoo said, noting that the creature on the right may be a female and the one on the left a male.

A magical spell written in Coptic, an Egyptian language that uses the Greek alphabet, surrounds the image. Just fragments of text have survived over the years, with part of the deciphered spell reading, “I call upon you … who is Christ the god of Israel …” The next part of the spell includes the words “you will dissolve” and mentions “every child of Adam…,” who according to the Hebrew Bible was the first man on Earth and lived with a woman named Eve in the Garden of Eden before being expelled by God. The fragmented text also mentions Ahitophel, a man who betrayed King David, according to the Hebrew Bible.

What was it used for?

The papyrus seems to have been one page of a larger text, possibly a handbook that was used by a magician, Korshi said.

The hypothetical magician’s clients may have been impressed by the image on the papyrus. “From an observer point of view, we could say that the image might have enhanced the performative aspect of the spell — the client might find the weird drawings an impressive addition to the overall atmosphere and impression created by the ritual,” Dosoo told Live Science.

The fragmentary text makes it hard to determine what exactly the spell was used for, but Dosoo said he believes that it may have been related to love, possibly in cases where there was a complex situation such as a love triangle, or where a man was in love with a woman he couldn’t marry.

“Christian literary texts from Egypt which mention love spells often imply that the problem is not that the woman doesn’t love the man per se, but that he does not have access to her, because she is a young unmarried girl protected and secluded by her family, or already married to someone else,” Dosoo told Live Science.

The papyrus is at Macquarie University in Sydney, Australia, but how it got there is a mystery. The university has no records indicating who sold or donated the papyrus, or when the acquisition occurred, Dosoo said.

The university has a collection of about 900 papyri, the bulk of which were purchased by or donated to the university between 1972 and 1985; it wasn’t until 2007 that the university stopped purchasing papyri or accepting them as donations. Many of these 900 papyri were purchased from Anton and Michael Fackelmann, who were antiquities dealers that were active in Austria in the 1970s and 1980s. Among these papyri is a “Handbook of Ritual Power” (as modern-day researchers call it), which is a lengthy magical text that also dates back around 1,300 years. However, while that handbook is from the Fackelmanns, it’s not clear if the newly published magical papyrus is also from them.

The university’s collection history poses a problem for scholars. In 1972, a UNESCO treaty banned the sale of antiquities that were removed from their country of origin after 1972. It’s not certain when this papyrus, and other papyri in the collection, were removed from Egypt.

With the ongoing looting that has ravaged Egypt’s archaeological sites, many scholars are not comfortable working with material that may have been taken out of Egypt after 1972. Part of the reason is that some scholars believe that publishing such material may help those trying to loot and sell archaeological remains from Egypt. There is also the question of ownership since, if an artifact was taken out of Egypt after 1972, then it’s possible the legal owner could in fact be the government of Egypt.

Many of the university’s papyri are not published. Despite the lack of information on when the recently deciphered papyrus was acquired, or who it was acquired from, the committee decided to publish the papyrus, noting the uncertain provenance in the journal article.

10 things good friends do not do!

What Your Food Cravings Really Mean

Psychic Vampires. People who live off  your life force.