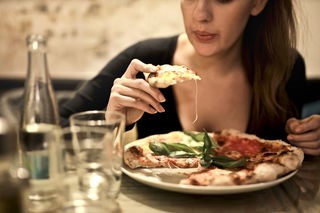 Dietary fads are nothing new in North America. The 19th century witnessed the promotion of the popular dietary systems of John Harvey Kellogg, a Seventh Day Adventist and vegetarian, and that of Presbyterian minister Sylvestor Graham inventor of the graham cracker   Often these food regimens were tied to larger utopian (or dystopian) projects aimed at moral improvement and the uplift of society.  While many of the self-proclaimed food experts of our time have less explicitly religious connections, the tone of their messages remain remarkably similar. What you eat,  we are told, will result in bountiful energy, glowing complexion and a good and long life.

The twentieth century, in turn, saw a startling array of diets including the Fletcherism, the Beverly Hills Diet, Atkins and the Blood Type Diet to name just a few. [i] In our time there has been an explosion of various regimens that have taken a particular turn. These tend to emphasize “clean” eating and often drastically limit what food can be eaten. These various food restrictions now threaten to make any form of communal eating if not impossible than an enormous chore for the host of the dinner party. These diets have been the fodder for many jokes but what are they saying about our late modern culture?  Why has the subject of what we eat become so charged with meaning for so many?

Anyone who has studied religion will likely not be surprised at the linking of food with larger systems of meaning. What we eat is is a key way to mark boundaries of community and food taboos whether of pork or beef or seafood are typical of religious and spiritual traditions. Food within many religious communities is approached as part of the sacred and eating is surrounded by rituals such as blessing, giving thanks and treated with reverence.  Refraining from food for periods of time is also ubiquitous across religions as seen in practices such as Lent, Ramadan and the fast at Yom Kippur.

While these practices seems natural from a religious worldview – what does it mean when these pre-occupations are secular and cluster around the food itself as meaningful?  What does it mean when a vegan friend eyes your pint of milk with disgust and judgement? Or a raw foodist insults your warm plate of lentils? Increasingly the media has begun to take note of the growth of these quasi-religious and often proselytizing approaches to food. Journalist Sarah Boesveld has noted the creation of a moral hierarchy of food and writes, “The relationship between food and virtue has deep roots. A bite from that apple in Eden, after all, was Eve’s fatal moral choice.”[ii].

Secular forms of food taboo, while not explicitly religious seem to partake of a similar logic of linking food choices with virtue. It is fascinating and often perplexing to watch the rise and fall of  “good” and “bad” foods.  Gluten, a seemingly innocuous protein found in wheat products is now being blamed for everything from Alzheimers to cancer but most importantly for creating “wheat belly”.. In his article in the Atlantic Monthly “ Purity Through Food: How Religious Ideas Sell Diets” and Timothy Caulfield’s “Is Gwyneth Paltrow Wrong About Everything” both lament the lack of science behind practices such as juicing.  But scientific rigor has never been the point.

It seems clear  that these food trends  are attempts to “enchant modernity” and bring some sense of meaning to life in a secular world. They express sometimes conscious and sometimes unconscious concerns about the ways in which our society has become dysfunctional. They also express a yearning to connect with more transcendent ideals and systems of meaning. For many vegans and vegetarians their food choices express a deep commitment to animal rights and care for the planet.

It is, however, concerning that in secular society food and the body are made to carry so much weight of meaning.  Psychologist Marion Woodman who spent much of  her career working with clients who had eating disorders and issues around addictions has argued that in a culture focused on materialism we are concretizing what were once spiritual ideas.[iii] Food for many now takes on a kind of numinosity. Woodman has also linked this approach to various forms of disordered eating including anorexia and bulimia.

In our time a new phenomenon of orthorexia, defined by the National Eating Disorders Association as an obsession with so-called healthy eating,  is increasingly common. Their website features a video warning against the concepts of clean eating and their contribution to a disordered and obsessive approach to eating.[iv]

So we can see that food continues to separate the pure from the impure and diet becomes an attempt to connect to higher purpose and meaning. On the shadow side it also reveals the ways this notion of the “pure” can move towards a sort of food fundamentalism. It is not surprising in a highly materialist culture that we are left with only body taken outside of larger system of meaning. However, the sins of “unregulated appetite” remain. Just as was the case with Kellogg and Graham this proliferation of diets points to a number of  larger concerns. In our time food increasingly takes on the a weight of morality and virtue and as a result the delicious can become dangerous.

[ii] Sarah Boesveld, “The New Religion: How Emphasis on Clean Eating has created a moral hierarchy of food,” National Post, May 30, 2015.

How Does Anesthesia Work? We Still Don’t Know: What Happens When Someone Goes “Under”?

The god of small things