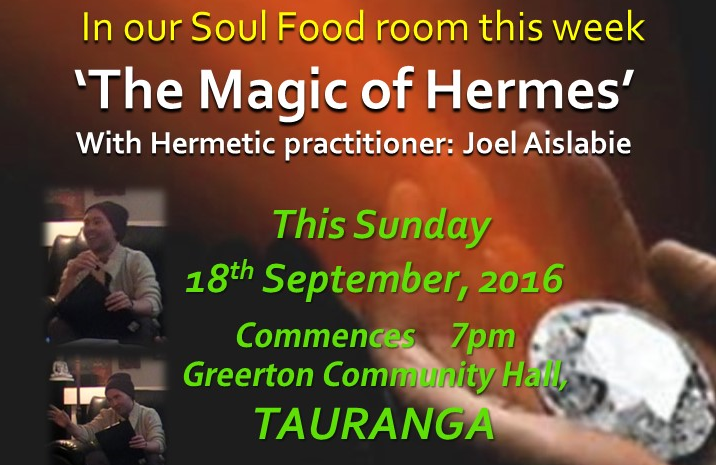 In Hermeticism, the ultimate reality is referred to variously as God, the All, or the One. God in the Hermetica is unitary and transcendent: he is one and exists apart from the material cosmos. Hermetism is therefore profoundly monotheistic although in a deistic and unitarian understanding of the term. “For it is a ridiculous thing to confess the World to be one, one Sun, one Moon, one Divinity, and yet to have, I know not how many gods.”[34]

Its philosophy teaches that there is a transcendent God, or Absolute, in which we and the entire universe participate. It also subscribes to the idea that other beings, such as aeons, angels and elementals, exist within the universe.

Hermeticists believe in a prisca theologia, the doctrine that a single, true theology exists, that it exists in all religions, and that it was given by God to man in antiquity.[6][7] In order to demonstrate the truth of the prisca theologiadoctrine, Christians appropriated the Hermetic teachings for their own purposes. By this account, Hermes Trismegistus was (according to the fathers of the Christian church) either a contemporary of Moses[35] or the third in a line of men named Hermes—Enoch, Noah, and the Egyptian priest-king who is known to us as Hermes Trismegistus.[36][37] 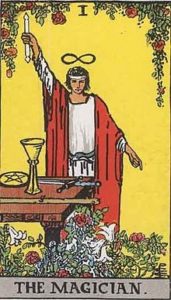 The Magician displaying the Hermetic concept of “As above, so below.”

The three parts of the wisdom of the whole universe

Alchemy (the operation of the Sun): Alchemy is not merely the changing of lead into gold.[40] It is an investigation into the spiritual constitution, or life, of matter and material existence through an application of the mysteries of birth, death, and resurrection.[41] The various stages of chemical distillation and fermentation, among other processes, are aspects of these mysteries that, when applied, quicken nature’s processes in order to bring a natural body to perfection.[42] This perfection is the accomplishment of the magnum opus (Latin for “Great Work”).

Astrology (the operation of the stars): Hermes claims that Zoroaster discovered this part of the wisdom of the whole universe, astrology, and taught it to man.[43] In Hermetic thought, it is likely that the movements of the planets have meaning beyond the laws of physics and actually hold metaphorical value as symbols in the mind of The All, or God. Astrology has influences upon the Earth, but does not dictate our actions, and wisdom is gained when we know what these influences are and how to deal with them.

Theurgy (the operation of the gods): There are two different types of magic, according to Giovanni Pico della Mirandola’s Apology, completely opposite of each other. The first is Goëtia(Greek: γοητεια), black magic reliant upon an alliance with evil spirits (i.e., demons). The second is Theurgy, divine magic reliant upon an alliance with divine spirits (i.e., angels, archangels, gods).[44]

Theurgy translates to “The Science or Art of Divine Works” and is the practical aspect of the Hermetic art of alchemy.[45] Furthermore, alchemy is seen as the “key” to theurgy,[46] the ultimate goal of which is to become united with higher counterparts, leading to the attainment of Divine Consciousness.[45]

O son, how many bodies have we to pass through, how many bands of demons, through how many series of repetitions and cycles of the stars, before we hasten to the One alone?[47]

Hermes explains in Book 9 of the Corpus Hermeticum that nous (reason and knowledge) brings forth either good or evil, depending upon whether one receives one’s perceptions from God or from demons. God brings forth good, but demons bring forth evil. Among the evils brought forth by demons are: “adultery, murder, violence to one’s father, sacrilege, ungodliness, strangling, suicide from a cliff and all such other demonic actions.”[48]

This provides evidence that Hermeticism includes a sense of morality. However, the word “good” is used very strictly. It is restricted to references to God.[49] It is only God (in the sense of the nous, not in the sense of the All) who is completely free of evil. Men are prevented from being good because man, having a body, is consumed by his physical nature, and is ignorant of the Supreme Good.[50]

A focus upon the material life is said to be the only thing that offends God:

As processions passing in the road cannot achieve anything themselves yet still obstruct others, so these men merely process through the universe, led by the pleasures of the body.[51]

One must create, one must do something positive in one’s life, because God is a generative power. Not creating anything leaves a person “sterile” (i.e., unable to accomplish anything).[52]

A creation story is told by God to Hermes in the first book of the Corpus Hermeticum. It begins when God, by an act of will, creates the primary matter that is to constitute the cosmos. From primary matter God separates the four elements (earth, air, fire, and water). Then God orders the elements into the seven heavens (often held to be the spheres of Mercury, Venus, Mars, Jupiter, Saturn, the Sun, and the Moon, which travel in circles and governdestiny).

“The Word” then leaps forth from the materializing four elements, which were unintelligent. Nous then makes the seven heavens spin, and from them spring forth creatures without speech. Earth is then separated from water, and animals (other than man) are brought forth.

The God then created androgynous man, in God’s own image, and handed over his creation.

Man carefully observed the creation of nous and received from God man’s authority over all creation. Man then rose up above the spheres’ paths in order to better view creation. He then showed the form of the All to Nature. Nature fell in love with the All, and man, seeing his reflection in water, fell in love with Nature and wished to dwell in it. Immediately, man became one with Nature and became a slave to its limitations, such as gender and sleep. In this way, man became speechless (having lost “the Word”) and he became “double”, being mortal in body yet immortal in spirit, and having authority over all creation yet subject to destiny.[53]

An alternative account of the fall of man, preserved in the Discourses of Isis to Horus, is as follows:

God, having created the universe, then created the divisions, the worlds, and various gods and goddesses, whom he appointed to certain parts of the universe. He then took a mysterious transparent substance, out of which he created human souls. He appointed the souls to the astral region, which is just above the physical region.

He then assigned the souls to create life on Earth. He handed over some of his creative substance to the souls and commanded them to contribute to his creation. The souls then used the substance to create the various animals and forms of physical life. Soon after, however, the souls began to overstep their boundaries; they succumbed to pride and desired to be equal to the highest gods.

God was displeased and called upon Hermes to create physical bodies that would imprison the souls as a punishment for them. Hermes created human bodies on earth, and God then told the souls of their punishment. God decreed that suffering would await them in the physical world, but he promised them that, if their actions on Earth were worthy of their divine origin, their condition would improve and they would eventually return to the heavenly world. If it did not improve, he would condemn them to repeated reincarnation upon Earth.[54]

How Your Finger Shape Determines Your Personality

Are You A ‘Good’ Influence On Your Kids?