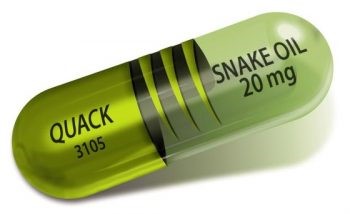 Who Are The Real “Quacks” and “Snake Oil” Salesmen?
Increasingly popular derogatory invectives like “quack” and “snake oil” actually have deeper historical roots than those who use them are aware of, and which indict the very conventional medical system they have uncritically adopted as the only one worth practicing.

For many centuries, the Chinese used snake oil as a treatment for joint pain, arthritis, and bursitis. They brought this folk remedy with them when they arrived in the US in the mid-1800’s to build the Transcontinental Railroad. That was backbreaking work. Synthetic pain-killers such as aspirin were not yet freely available. When the Chinese workers offered their remedy to Westerners as a palliative it was likely perceived to be a “primitive” form of “quackery” by the medical experts of that time. This is one probable origin of the derogatory meaning of the word “snake oil.”

On the other hand, the word “quack” as used today came from the German word for “quicksilver,” namely: “quecksilber” It is believed that American dentists shortened it to “quack” to describe the amalgam-hucksters. Quick-silver Associates write “It is sobering to realize that the original “quacks” were dentists who advocated the use of mercury amalgam.” Learn more on this topic by reading “Quacks, Quack Doctors, and Quackery.”
Perhaps the most ironic thing about modern pharmaceutical “snake oil,” i.e. petrochemical-derived and patented synthetic chemicals, is that they often have considerably less value than a placebo, and in certain cases may not even compare in therapeutic value to actual snake oil. And that is over and above the fact that their safety is many orders of magnitude lower, with pharmaceuticals known to kill well over 100,000 patients each year in the U.S. even when correctly prescribed.

Let’s look closer at another example of purported “snake oil”: the traditional practice among the Maori and Chinese of eating earthworms to settle an upset stomach. Long considered an obscene, disgusting, “folk medicine” practice, these 3 scientific studies tell quite a different story:
________________________________________
Study: Earthworm paste has antioxidant and antiulcer properties superior to the drug ranitidine.
Pubmed Data: Eur Rev Med Pharmacol Sci. 2007 Jan-Feb;11(1):9-15.
Article Published Date: Jan 01, 2007
Study Type: Animal Study
Study: Earthworm paste has gastroprotective properties and is superior to the drug ranitidine in preventing experimentally induced gastric ulcer.
Pubmed Data: Eur Rev Med Pharmacol Sci. 2010 Mar;14(3):171-6.
Article Published Date: Mar 01, 2010
Study Type: Animal Study
Study: Earthworm powder has antioxidant and hepatoprotective properties against alcohol-induced toxicity in rats.
Pubmed Data: Eur Rev Med Pharmacol Sci. 2008 Jul-Aug;12(4):237-43.
Article Published Date: Jul 01, 2008
Study Type: Animal Study
________________________________________
In the first two studies, earthworms are shown superior to Ranitidine as an anti-ulcer, gastroprotective agent. Ranitidine is a chemical which blocks the H2-histamine receptors in the parietal cells in the stomach that produce hydrochloric acid, and is sold under the trade name Zantac. Until Zantac lost its patent in 1997, global sales reached 1.6 billion dollars annually. And yet despite these blockbuster sales, its value as a “medicine” compares poorly to the consumption of creatures that live beneath our feet, and who also, incidentally, make possible all the food we consume through their indispensable role in producing fecund soil.

So which is the “snake-oil,” the infatuated object of “quackery”? Synthetic chemicals excreted by a vast petrochemical-medical-industrial complex, and re-purposed and repackaged to the consumer as “medicines” at mark ups thousands of times higher than cost? Or, natural substances and organisms traditionally used as food-medicines, sometimes for thousands of years before the advent of modern, scientism- and drug-driven medicine?
Just for the record, I won’t be eating worms any time soon. But given the choice between a chemical, with no biological or evolutionary precedent in my body, and an earthworm or sip of actual snake oil, I will gladly choose the latter.

Be sure to check out the other 40 instances of scientific research confirming Traditional Medicine from around the world. And use the GreenMedInfo Research Dashboard for instant access to over 10,000+ different natural health topics all supported by the published, peer-reviewed biomedical and life sciences literature. 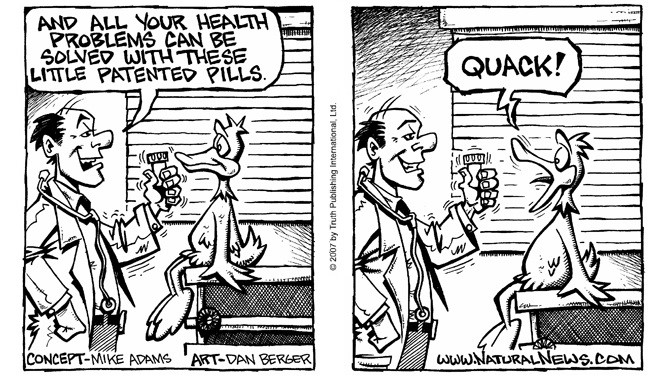 Acceptance: The Surprising Antidote to Suffering

Life Was Made For Joy And Woe – A Lesson In Acceptance

Full Moon in Scorpio – A New State of Being