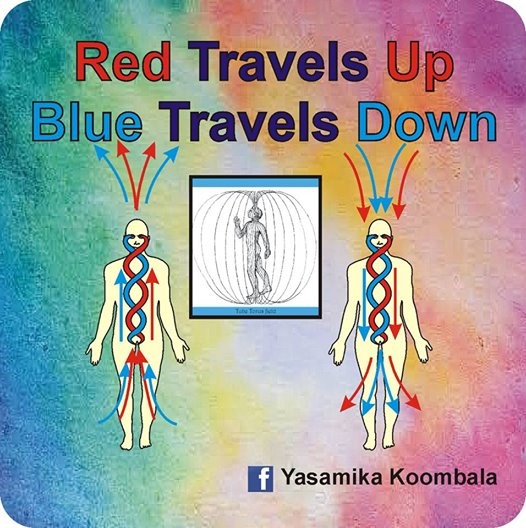 The hu-man vessel is wrapped in an electromagnetic field known as a Tube Torus. It looks like a large doughnut of energy with our physical body positioned in the centre. The energy of the Tube Torus flows vertically up and down through us, with the direction of the energy dependent on our subconscious mindset in each moment.

The more we understand the 4th-Dimensional subconscious Red and Blue mindsets, the better we understand 3rd-dimensional life and hu-man nature. The mindsets have their own current, the direction of that current influences how we think and behave at any given time. Each mindset is the complementary opposite of the other mindset, and so is the direction or flow of the Red or Blue current.

The Red current travels up from Mother Earth and through the body; it moves up through the feet and base chakra, spirals through the torso, neck and head, then exits the top of the head through the crown chakra, flowing up into the cosmos above.

The Blue current travels in the opposite direction; coming down from the cosmos through the top of the head via the crown chakra, spiralling down through the neck and into the torso, exiting through the base chakra and feet, where it enters Mother Earth.

Because the Red current is in an upward motion through the body, someone in a Red mindset focuses on lifting energy, emotionally building people’s confidence up, being an upbeat and cheerful personality. With the Red being emotion and feeling based, the Red mindset works with intangible energy. When Reds build a person up, they do so in an intangible, emotional way.

This drive to uplift is so strong within a Red person that it forms part of their perceived purpose in life. Reds go searching for people who are emotionally low so they can lift their spirits and emotions. Reds enter a room and lift the energy by just being there.

The Red subconscious mind ensures that they are visibly or vocally happy or silly. They often use self-depreciating humour or make fun of themselves to raise the energy around them. This is where clown karma comes in.

The negative side of this Red mindset is that they are continually trying to find people who need lifting which eventually tires the person out. People visit Reds when they are feeling emotionally low and need an emotional lift in life. After a visit, the down person will leave with their spirits raised, the Red may initially feel good too because they’ve fulfilled their karmic gesture of raising another being, but the Red will soon tire after the visit, having used all of their emotional energy to boost the other person.

It is important to remember that while Red people are trying really hard to emotionally help others, the others usually do nought subconsciously want help; they seek out Reds for the emotional fix in the form of a lift, nought for a tangible solution to a problem.

The Blue mindset, being the opposite of the Red, is all about down energy. This downward energy of the Blue is what incarnates or manifests things into the tangible solid world of the 3rd dimension, travelling down from the cosmos, being funnelled down to earth through the Blue person.

Blue people are intense and focused in a downward manner. Because of the flow of this energy, Blues will karmically by default bring an intenseness and pressure with them wherever they go.

It is important for Blues to bring things down, in fact, it is perceived as a part of their purpose in life. A Blue person will intentionally bring others back down to earth, or cut people down to size. Blues are tangible realists and deem this downing behaviour a positive trait. Having a Blue person in your reality can be very tiring and detrimental to confidence because they always focus on the down aspect.

Even the sense of humour of the Blue mindset is energetically downward, dry and sarcastic. Because the Blue mindset is rooted in knowledge and intelligence, a quick-witted Blue will tell clever jokes to have a laugh, often turning a joke into a downing poke.

Having a person with a Blue mindset in your reality can be like a non-stop mind game. Blues are competitive! They love to win and hate to lose. Blues will throw humour or dialogue at you, testing you out and expecting you to catch what they serve and bounce it back to them. The quicker the better. This sort of rapid banter or roasting back and forward sparks a happy and positive Blue demeanour.

(Reds operate in a different current, remember!? They subconsciously like upward energy, so a humourous downward Blue poke will be perceived negatively by the Red mindset.)

The Blue, having nought received the rebound they were expecting from their witty intelligent remark will be confused and annoyed, the situation will usually implode with each person wondering why the hell did the other behave the way they did!?

When one mindset is operating in the opposite current to the other, confusion reigns!

Awareness and understanding of the Red and Blue currents help us grasp the reasons why so much communication gets lost in translation.

6 Ways to Incorporate Essential Oils in Your Home