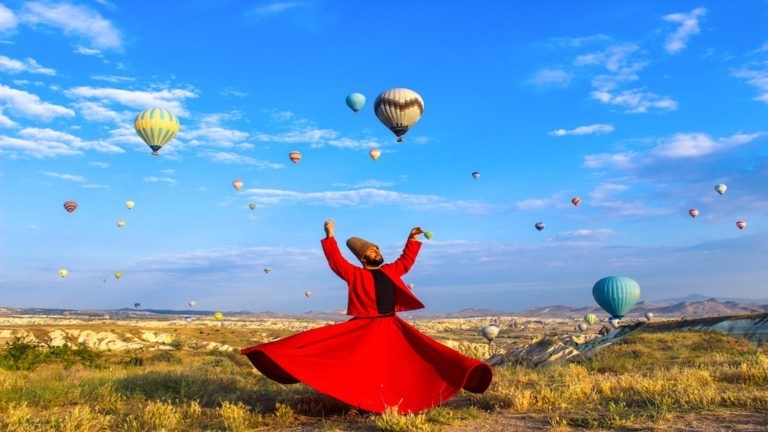 Sufism has produced some of the most profound writers and teachers in our planet’s history. The writings of Rumi and Hafiz have opened more hearts than most religions can claim throughout their existence. Sufism opens hearts and clears the pathways to the sweetest depths of the divine.

Sufism, or Tasawwuf, the mystical arm of Islam, is practiced in a variety of forms by millions of people around the world. The root, Sufi, means “pure.” Students and practitioners of Sufism are known as Sufis and believe themselves to be the “people of true beingness.”

“Wherever you are, and whatever you do, be in love.”

While traditional Islamic and Sufi scholars will defend Sufism’s connection to Islam, many practitioners of its tenets do not identify as Muslim. They identify as open, forgiving, explorative, poetic and eternal lovers of the divine. It is in this way that Sufism might be considered distinct from Islam.

Sufism teaches us about the inward and deepest dimensions of the Self and how life is lived. It is characterized by beautiful rituals, dances, practices, values, and doctrines that were initiated long ago. The source of Sufi doctrine and meditations were born from manuals, treatises, discourses and poetry between the 8th and 10th centuries.

While modern psychology focuses on the personality, esoteric traditions like Sufism focus on the unknowable eternal aspect within each of us, the eternal Self that is in harmony with all that exists and all that has ever existed. It is in this way that Sufism cannot be categorized as an organization or solely Islamic. In fact, Sufism is not limited to any religion, historical period, culture, society, or language. The tenets of Sufism are born from the essence of the world’s purest teachings.

“Let him who seeks continue seeking until he finds. When he finds, he will become troubled. When he becomes troubled, he will be astonished, and he will rule over the All.”

Rumi: Poet of the Heart

One of the loveliest Sufi tenets is “God is the Lover and the Beloved.” Through this phrase, we can see that the most loving Sufis seek submersion in the bosom of the Divine Creator, thereby dissolving into their most Beloved.

While traditional Sufis belong to organizations referred to as an order or turuq, many modern Sufis gather and practice in casual and community groups or practice alone. The most traditional Sufi gatherings are formed under a Wali or grandmaster. An authentic Wali’s training can be traced through a direct line of successive Walis all the way back to the Islamic prophet, Muhammad.

Traditional Sufi orders strive for perfection in worship and refer to Muhammad as the perfect man or the one who exemplifies the ultimate divine morality. The more casual lovers of Sufism, which is popular today, are focused on the divine, eternal consciousness, rather than Muhammad and the traditional teachings of Islam.

At long last, open your eyes.

Awake! Abandon your sleep of illusion.

It is foolish to sleep all the time.”

While it sounds mysterious and other-worldly, Sufism has many things in common with Christianity, Judaism, Paganism, and other spiritual disciplines. The common themes include love, forgiveness, transcendence and divinely inspired rituals. Because of the heart-centered nature of Sufism, many Sufis are drawn to the poetry of Sanai, Rumi, Hafiz, Jami, Nezami and many others whose writings transcend all religious doctrine, as well as time itself.

The Realms of Reality

Many Sufis believe there are Seven Planes of Existence, each with a specific purpose. They are as follows:

“I have been a seeker and I still am, but I stopped asking the books and the stars. I started listening to the teaching of my Soul.”

The Teachings of Sufism

While this list is just a sprinkling of ideas from the deep well of Sufism, here are some of the relatable and most profound teachings:

– Surrender: Surrender to love and allow the heart to be the instrument of connection and exploration.

– Be Devotional: Open your heart when praying so that you can absorb the light of the divine to its fullest extent.

– Chant: Recite aloud or silently within the mind the names of the divine using prayer beads or written prayers. In Islam, the repetitive utterances of short sentences glorifying God is known as Dhikr. When someone prays in this way, they are known as a dakir.

– Ritualistic Dance: Dance prayerfully in pursuit of divine light so that your body can forget itself, and so that your soul can burst through your physical form to connect with the divine reality. Initiates to Sufism are called Dervishes. The whirling part of the sacred Sama ceremony is where the phrase Whirling Dervish originated.

– Selfless Service: Practice loving kindness and selfless service so that you can ease the pain of others. When we serve others in this way, we elevate humankind and we expand our empathy and awareness.

– Honor the Divine Feminine: Through the healing arts and the expression of feelings, we cleanse our hearts. Honoring the feminine in all living beings and in all of our actions allows us to be in harmony with creation.

– Dreamwork: Be aware of and derive lessons from your dreams. Practice being awake within your dreams so that you can infuse each moment and every character with the purest intentions, trajectories, and outcomes.

– Die Before You Die: Learn to relinquish your self-identity and worldly position prior to your death. This involves detaching from material and sense objects and placing a deeper focus on the eternal aspects of our nature.

– Embrace Divine Writings: Relish the writings of Rumi and all the Sufi poets and masters. Their special writings have the power to unlock the most stubborn doors and connect us with the mysteries of the universe.

– Return to Innocence: Given the complexities of this life and other lives, we continue to accumulate energetic attachments and emotional binds. As children are within the sphere of enlightenment, when we return to innocence, we experience the same.

the floods of tears for you would sweep me away

the fire of the grief over you would burn my heart wailing.”

As human beings, we are multidimensional and emotionally complex. We are collections of debris from prior lives and other realms. We absorb ideas, impressions, attitudes, and projections from religions, societies, schools and our families. In all, we are bundles of temporary characteristics, working to reconnect with our original selves and the Absolute.

By exploring our emotions and desires through our prayers and dreams, we can begin to recognize our temporary self-identities and self-imposed limits. If we can embrace our own secret and subtle innocence, we can relinquish the old and oppressive aspects, and illuminate every part of our powerful hearts.

Sufism is unique in how it explores and manifests the feminine aspects of creation, which clearly hold the secrets to the nature of our individual universes. The divine awaits our liberation.

“Whether your destiny is glory or disgrace,

Purify yourself of hatred and love of self.

Polish your mirror; and that sublime Beauty

From the regions of mystery

Will flame out in your heart

As it did for the saints and prophets.

Then, with your heart on fire with that Splendor,

The secret of the Beloved will no longer be hidden.”

Learn the Meaning of Namasté