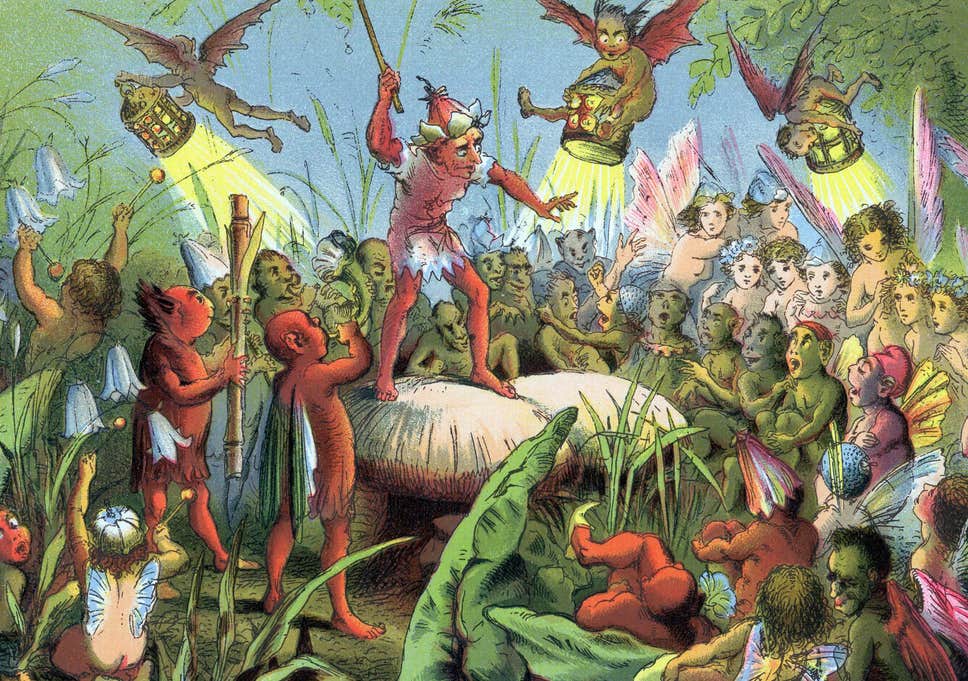 Amazingly, there are eyewitnesses who claim they are very real!

Of all paranormal phenomena, the existence of “little people” – whether they be ​fairies, elves, or leprechauns – is among beliefs that receive little serious attention, even among paranormal researchers. These myths are ancient and reside deep within the folklore of many cultures. But no one today really believes in these tiny, magical beings…

K.T. relates this story of her face-to-face encounter:

In October, 2003, in Greensburg, Pennsylvania, I was out playing on our patio with my 2½-year-old son when he stopped suddenly and asked me: who was the little man sitting on our stone wall? I looked where he was pointing and saw nothing… but the area looked different somehow (shimmery?). Later, in January 2004, we were again outside playing, this time with my husband, when the most beautiful snow began to fall. It was just coming on to dusk and I said I wanted to take a quick walk in the woods and my husband would watch our son while I went. I started through the woods and was somewhat perplexed by how different everything looked. Hard to describe; again “shimmery” is first word that comes to mind. As I rounded a bend in the path, I came face-to-face, about three or four feet away, with a little elf-looking man peering right at me from behind a tree. It was almost a stereotypical elf: long, pointy ears, long funny-shaped nose, very long fingers and pointy cap. It was wearing red clothes and hat, and its skin appeared to be a very light lavender color. I let out a startled “Ooh!” and it jerked back and just disappeared into thin air.

Was this the product of a tired mind and an active imagination? Quite possibly. But, like stories of ghost encounters, these tales are related by serious people who will usually swear that they were not under the influence of alcohol or drugs and that their experiences seemed entirely real.

In Jerome Clark’s book, Unexplained!, he retells the story of 13-year-old Harry Anderson who had a strange encounter on a summer night in 1919. Anderson claimed to have seen a column of 20 little men marching in single file toward him. The bright moonlight made them clearly visible, and Anderson could see that they were dressed in leather knee pants with suspenders. The men were shirtless, bald and had pale white skin. They paid no attention to Anderson as they passed and seemed to be mumbling something unintelligible all the while.

In Stowmarket, England in 1842, a man claimed this encounter with “faries” when walking through a meadow on his journey home:

There might be a dozen of them, the biggest about three feet high, and small ones like dolls. They were moving around hand in hand in a ring; no noise came from them. They seemed light and shadowy, not like solid bodies. I… could see them as plain as I do you. I ran home and called three women to come back with me and see them. But when we got to the place, they were all gone. I was quite sober at the time.

The legends of these wee creatures are told all over the world. While the Irish have their gold-rich and clever leprechauns, the Scandinavians have their trolls, and in Central America the small dwarflike beings are known as ikalsand wendis. The ikals were described by the Tzeltal Indians as being about three feet tall, quite hairy and living in caves like bats.

Iceland also has its elves, who are said to be very protective of their habitations. Those who attempt to disturb them are in for trouble. One story is told of the construction of a new harbor at Akureyri in 1962. Repeated attempts to blast away rocks continually failed. Equipment malfunctioned and workers were regularly being injured or falling ill. Then a man named Olafur Baldursson claimed that the reason for the trouble was that the site of the blast was the home of some “little people.” He told the city authorities that he would work out a deal with the little people. When he came back and reported that the little folks were satisfied, the work proceeded with no problems.

Icelanders – citizens of one of the most literate nations in the world – take their elves quite seriously. Even today, Iceland’s most well-known “elf-spotter,” Erla Stefansdottur, has helped Reykjavik’s planning department and tourist authorities create maps that chart the haunts of hidden folk. The public roads authority quite often routes roads around hallowed boulders and other spots believed to be inhabited by the elves.

Sightings of the little people continue right up to the present day. In fact, there have been several postings on the Paranormal Phenomenon Forum from readers who have either heard stories of such encounters or have experienced them first-hand. Here are some examples:

“I learned that a bored young boy playing along a creek near Bend, Oregon, saw two little people who crossed the creek and stood looking at him. He said they were no more than 15 to 18 inches high and very dark complected. They wore skins as garments, and after a period of 10 to 15 seconds, walked back across the creek and into the forest. The boy showed their footprints to his parents, who had contracted to a logging company to clean up slash piles. The prints were obvious and his parents were flabbergasted, but chose not to follow the little beings into the woods. He believes now that the little men weren’t happy about the logging and destruction in the forest.”

“The last time I saw little people was around 1957 in Fort Worth, Texas. I had been sleeping and something made me open my eyes. I saw two small people looking back at me. I was too tired and sleepy at the time to pursue further investigation of these two little guys who had very little hair and wore shabby strange clothes. They sort of smiled at me and I fell back to sleep. I know what I saw and they were real.”

“I don’t know if what I saw was a “little person,” but when I was younger, around seven or eight, these little shadows or elves, maybe the size of a pinky, would come out in my room. I can’t remember the feelings I had. I wouldn’t go to bed with the lights out and I insisted that my parents stay with me in my room until I fell asleep. I think they thought I was crazy or something! But I know what I saw. Most of the time, they walked on my window, but then when I turned the other direction, they would jump in front of me as if they wanted me to see them. I don’t think I was all that scared, but I can still remember clearly what they looked like. Over a period of time, they disappeared. I think it lasted a year. Also, I remember that when I wanted them to go away, I would ask them to leave. If they didn’t, then I would try to smack them with my hand, but they would disappear before I could. I don’t recall them talking. It was strange, but I know it happened.”

“Last year when my daughter and friends were four- wheeling in the woods in Washington state, they were stuck and having problems getting out. When working at getting out, an elf- like person came out and looked at them. The elf had a bow and arrow, pointed hat and pointed ears. Six people saw it.”

MORE STORIES OF THE LITTLE PEOPLE

Daniel heard a curious story from his “Unc’Willy”. At the time, Willy was a young man in his early 30s. He was riding on his horse along one of the many natural springs in the area and stopped to roll himself a cigarette and rest a while. As he stood by the water, he heard a strange “scraping sound,” and curious that it may be an animal he crept to the grass along this small stream. Upon pushing the reeds apart, he looked on two strange little figures that were no taller than a man’s fist! One came out of the water while the other sat alongside the stream. The one sitting seemed to be scraping something in its hands.

When Willy realized what he was seeing was real, the awareness brought about the awareness of these small people, who froze in their tracks. As Willy pushed through the grass toward them for a better look, one figure dropped to one side and fell into the water, disappearing, even though this small stream of water was no more than an inch or two deep. The other produced a small leather pouch out of which he took several old arrowheads, and with these was the tool which produced the scraping noise he heard. It was a tiny stone knife and he also kept the crayfish claw that the creature was trying to open when Willy happened along.

Paul of South Africa has a story that’s equally strange. This experience took place in 1986 in Durban, South Africa at the Mangrove Swamps Nature Reserve at approximately 6 p.m. On this day, Paul tells us, he and five friends set off on a hike off the main trial in the swamp. “We walked for about 10 minutes when the swamp gave way to a clearing with rock formations similar to that of a small natural amphitheater,” he says. “There were illuminated fire lights all around this amphitheater. Directly in front of me was a small person who was just over three feet in height. He looked directly at me and pointed at me in surprise.”

At this point the entire group of friends had caught up to Paul. “We looked around and witnessed little people sitting on the illuminated rock formations and others who were interacting with each other,” he continues. “The light and forms we saw were of an ethereal light clearly less dense then light we are familiar with. I estimated there to be between 20 to 30 of these little people. We were shocked and frightened by this phenomenon we experienced.”

The experience lasted only about 10 seconds for the friends, but seemed to play out as if in slow motion. “We turned and ran as fast as we could toward our vehicle,” Paul says. “On arriving, we tried to make sense of what we witnessed. We returned to the spot and saw nothing but bush. No lights, no little people, no rock formation, just bush.”

What can we make of these stories? Tall tales? Hallucinations? Could they possibly be real – “real” in a way that challenges our current understanding of the world?

The Spiritual Significance of the Numbers 11:11