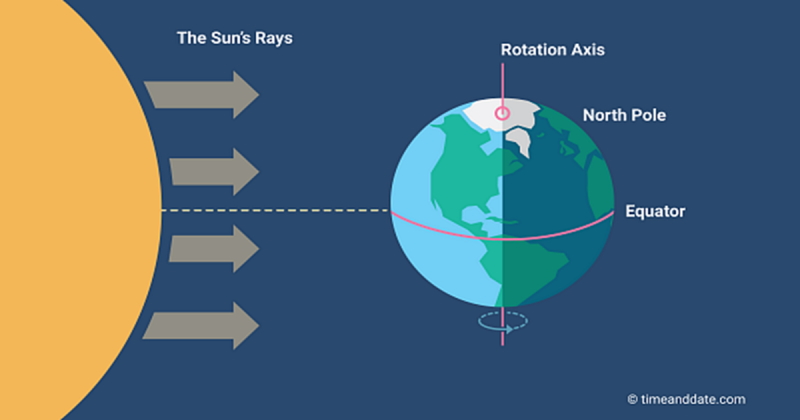 By Konstantin Bikos and Aparna Kher

There are two equinoxes every year: one in March and one in September. In March, the Sun crosses the equator from south to north.

On the equinox, the Earth’s axis is perpendicular to the Sun’s rays.

The March equinox is the moment the Sun crosses the celestial equator—an imaginary line in the sky above Earth’s equator—from south to north. This happens on March 19, 20, or 21 every year.

Why Does the Sun Move North and South?

During the course of a year, the subsolar point—the spot on the Earth’s surface directly beneath the Sun—slowly moves along a north-south axis. Having reached its southernmost point at the December solstice, it starts moving northward until it crosses the equator on the day of the March equinox. The June solstice marks the northernmost point of its journey.

The Sun: Our home star

How do seasons work?

Earth is tilted as it orbits the Sun, which is why equinoxes and solstices happen.

Why Is It Called “Equinox?”

On the days of the equinoxes, the Earth’s axis is perpendicular to the Sun’s rays, meaning that all regions on Earth receive about the same number of hours of sunlight. In other words, night and day are, in principle, the same length all over the world. This is the reason it’s called an “equinox,” derived from Latin, meaning “equal night.”

However, this is literal translation not entirely true. In reality, equinox days don’t have exactly 12 hours of daylight and 12 hours of dark.

The Equinoxes and the Seasons

The March and September equinoxes mark the beginning of the spring and autumn seasons on Earth, according to one definition. The equinox in March is the start of spring in the Northern Hemisphere and the beginning of fall south of the equator.

The March equinox can be used to measure a tropical year, the mean time it takes for the Earth to complete a full orbit around the Sun. Also known as a solar year, a tropical year is approximately 365 days, 5 hours, 48 minutes, and 45 seconds long. It can vary by up to 30 minutes each year.

Why Does the Date Vary?

The date of the equinoxes and solstices varies because a year in our calendar does not exactly match the length of the tropical year—the time it takes the Earth to complete an orbit around the Sun.

Today’s Gregorian calendar has 365 days in a common year and 366 days in a leap year. However, our planet takes about 365.242199 days to orbit the Sun. This means that the timing of the equinoxes and solstices slowly drifts apart from the Gregorian calendar, and the solstice happens about 6 hours later each year. Eventually, the accumulated lag becomes so large that it falls on the following date.

To realign the calendar with the tropical year, a leap day is introduced (nearly) every four years. When this happens, the equinox and solstice dates shift back to the earlier date again.

Other factors influencing the timing of the equinoxes and solstices include variations in the length of a tropical year and in the orbital and daily rotational motion of the Earth, such as the “wobble” in the Earth’s axis (precession).

5 Common Dreams And Their Meanings