If you look down as you enter the main door of Freemasons¹ Hall in Great Queen Street in London there is a pentagram on the floor, a five point star. The lecture on numbers in the Zelator degree of the Societas Rosicruciana uses Pentagram to illustrate the number five and the six point Seal of Solomon or Star of David to illustrate the number six. Both are very ancient symbols and I want to concentrate on the question of where they came from.

For the first step I need to draw your attention to the two planets closer to the sun than Earth Venus and Mercury. Take Venus first. Because it is a little nearer the sun than the earth is, its orbit is shorter: though the speed of both through space is similar, from any starting point, Venus gains on the Earth, like an athlete on the inside track at a bend. If both start from the same position on the zodiac, Venus reaches a point when, seen from earth, it is on the far side of the sun, directly in line with it. That is the ³Superior Conjunction². Venus gets back to the starting point before the earth, starts on the second orbit and lines up between the earth and sun, an ³Inferior Conjunction² and continues its orbit, getting further ahead of earth until the next ³Superior Conjunction². 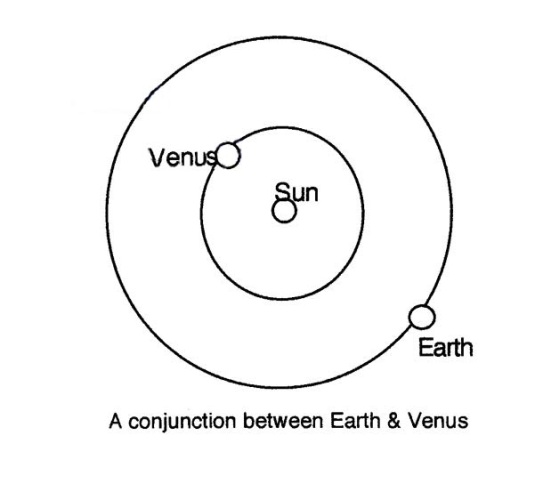 Because Venus and Earth take different times to complete their orbits, it is 8 years before the two planets arrive back at the same initial point. In that time Venus has completed 10 orbits and the Earth 8. There have thus been ten conjunctions five ³superior¹ and five Œinferior² in the 8 years. The next step is to imagine two circles, each representing the zodiac as followed by the sun, and mark on one the position of the superior conjunctions and the order in which they occur. On the other circle, mark the positions of the inferior conjunctions and the order in which they occur. In both cases, draw a line between position one and position two, then position two and position three and so on. The result is more than interesting: the result is shattering. 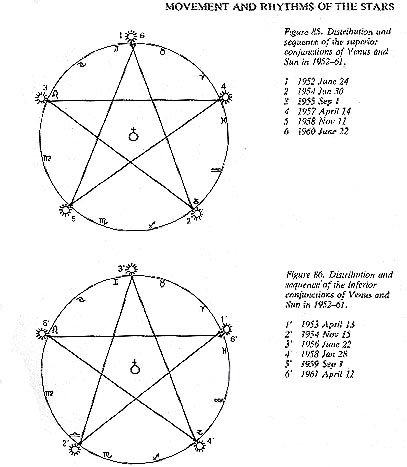 This is a stunning fact, but there is more. Mercury, like Venus has a shorter orbit than Earth; in the case of Mercury, very much shorter. Mercury completes three orbits in just under 50 weeks, so that there are six conjunctions three ³inferior² and three ³superior² in each year. If all six are marked on the circle of the zodiac and the three inferior joined by lines drawn 1-2-3-1 and the three superior joined 1-2-3-1. The result is a hexagram the Star of David or Seal of Solomon. What makes this an even more striking image is that, as you will all recognise, the order of drawing the triangles is the same as that used in the dedication of the temple prior to a Martinist meeting.

These are real phenomena and, it seems to me, can only have one of four possible explanations.

First, it is just a meaningless coincidence. Science has a habit of dismissing anything it can¹t explain as a coincidence¹. I wouldn¹t like to calculate the odds against chance of a figure like a regular pentagram being produced by the conjunctions of Venus or a regular hexagram being produced by the conjunctions of Mercury by chance, when both are extremely ancient symbols, but it must be billions to one against.

Second, these very ancient symbols might be among the last remnants of an earlier civilisation, along with myths and very ancient remains. Perhaps these symbols represent a lingering remnant of its observation and learning.

Third, these might be an example of what Carl Jung described as Œsynchronicity¹ meaningful coincidences. Remember that, by an inexplicable coincidence there are supposed to be the same number of hexagrams on the I-Ching as there are loops on a strand of DNA. Perhaps these symbols describe something about universal reality.

Fourth they could be a form of future memory. Sci-Fi writer Clifford Simak describes in one of his books aliens who were trying to help the human race but hid themselves because the race had a future race memory, which identified the aliens as demons. Maybe we have a race memory from the far past which produced symbols the meaning of which we would learn three thousand or more years later.

Each of the possibilities seems in some degree absurd coincidence, information from a forgotten civilisation, synchronistic links embedded in the fabric of reality or future memory. I know which I think is the most probable explanation, but which do you think is most likely?

The information and the drawings came from:

A Lesson from the Aboriginal Book of Wisdom

IF THINKING CAN HEAL, WHY DO WE NEED ANTIDEPRESSANTS?