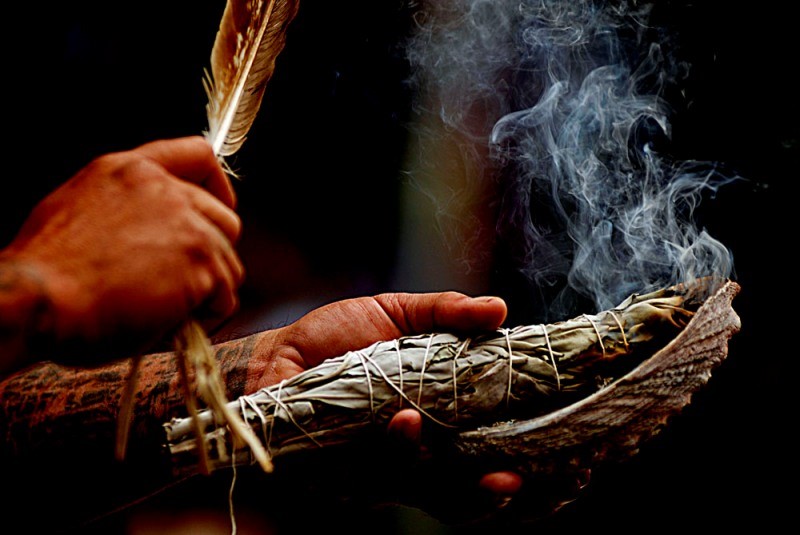 I’m writing this article from Pisac, Peru, where I’m meeting with shamans as research for an upcoming book Sacred Medicine, an exploration of anomalous healing. My spiritual love affair with shamanism began on my wedding day at Post Ranch Inn in 2005. I was browsing through the posh resort’s list of activities. I read through it — yoga, group meditation… shamanic journey. Now that sounded interesting! With no idea what a shamanic journey actually was, I thought it would make for a good story.
A shamanic journey on my wedding day? Why not?

Now mind you, I had no idea what a shaman actually was. And this was long before I had left my job in conventional medicine. I was not the New Age type at all, and I tended to be cynical and even mocking of things that didn’t fit neatly into my rational little box. But it was my wedding day, and I was happy, and I was feeling a little… I don’t know… unusually willing to explore outside of my comfort zone.

I showed up in the yurt in the middle of a meadow, expecting to encounter a long-bearded Inca decked out in tribal robes, maybe smoking a peace pipe. I didn’t expect what I found — a handsome Kiefer Sutherland look alike sitting cross-legged in blue jeans. Ten of us crowded into the yurt and formed a circle, while the shaman, who I later learned was named Jon Rasmussen began chanting to the four winds, invoking the spirits of nature and honoring Pachamama (Mother Earth). Inhaling a floral essence from a bottle, he exhaled misty puffs of fragrance to the north, east, south, and west, calling in the ancestors and the totem animals, before asking us to lie on our backs on padded mats. We listened and closed our eyes, while he beat a drum like a collective heartbeat. His voice intoned over the drumbeat, lulling us into a sort of tribal trance.

The Shamanic Journey
Begin by drawing your attention to your sixth chakra, your third eye, right between your eyebrows, deep inside, where your intuition lies. Now focus on your fourth chakra, the heart chakra, where you’ll find your compassion and love. Now allow yourself to flow through your bloodstream, down to the tips of your fingers and toes, then down into your mat, through the pebbles and grass and rocky Big Sur terrain, all the way down to the earth’s core. Here, in the molten earth, we will walk through four chambers. Now we are here, at the first chamber, where you will meet yourself at a time in your life when you were your most joyful.
In my mind’s eye, I saw the Squirrel Girl, the healer, long before medical school and residency did their number on me. Jon instructed me to take hold of this Lissa’s hand.

Now, holding hands with your joyful self, walk with me into the second chamber. Recall a time in your past when you were broken. How has that brokenness changed you? Have you created patterns in your current life as a result of this time of brokenness? What contracts have you made with yourself that no longer serve you?

I thought about the night I had to deliver four dead babies, when I was shamed for grieving over the loss. I thought of the professors who had sexually harassed me, who had degraded me for being female. I heard all the voices telling me I wasn’t good enough, voices that stabbed like daggers, raised voices that said, “I didn’t even go to my own father’s funeral,” and “Buck up, Rankin. You’ll never amount to anything in this business unless you can stop feeling so damn much.” Next thing I knew, I was weeping.

Now I’d like to invite you to release those contracts that no longer serve you. Let them go to the four winds. Release them. You don’t need them anymore.

I imagined knives and sandpaper and razorblades, flying out of my body into the four winds.

Now we’re entering the third chamber. Here, I’d like you to envision the passion in your life that helps you return to the joyful state of your past self.

Visions of my painting flooded me. Amorphous egg shapes, interlaced with swirling lines of color and geometry and spontaneity, in cobalt yellow and cadmium red and Payne’s grey. A feeling of gratitude rushed over me. How lucky that I had been given this gift of my art.

Now I want you to allow yourself to be filled with this passion that returns you to your joyful being. Let it flow into you. Take it in, and hold it there, while we approach the fourth chamber. Here, you will receive a gift. Imagine an object, the first one that comes to mind. This will be your gift.
I saw a stethoscope with a pink paintbrush embellishing the stethoscope’s diaphragm.
Now I’d like you to reflect on this gift. Why was it given to you? What does it mean? How might this gift help you resolve the conflict in your life that separates you from your joyful self? How might it return you to your purest state of being? 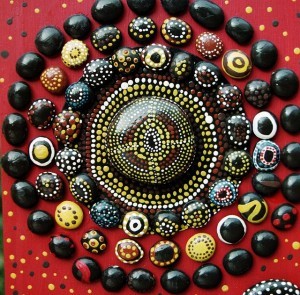 It took me years to realize what the gift meant, but Jon had warned us not to worry about it, that the meaning of our gift would make itself known to us when we were ready.

Now I’d like you to rise up, from deep within the earth’s core, up through the layers of rock and soil, through the grass and the California poppies and the lupine, through the floor and up into your mat and back into your body. From your fingertips and toes, into your bloodstream, back to your heart chakra. Rest here for a moment. Feel the peace.

The drumbeat slowed, and the shaman, once again, blew the misty fragrance to the four winds.

Now draw your attention to your third eye, right between your eyebrows. Live there for a moment. Now take with you your gift, and when you’re ready, open your eyes.

Our shamanic journey was complete.

When I opened my eyes, they were bloodshot and puffy from tears. I felt like someone had just flipped me upside down, changed the axis of my earth, and unwound me. What had just happened?

Shamanism + Western Medicine = The Potential for Miracles
That all happened in 2005, and shaman Jon Rasmussen and I have been friends and colleagues for over ten years now. (He still does private sessions via phone and Skype, and he also takes people on trips to Peru.) I HIGHLY recommend working with Jon if you’re curious what it’s like to do a session with a shaman. Learn more about Jon’s work here.
I’m now in Peru, being guided in this phase of my Sacred Medicine journey with Jon’s help, meeting the people he senses I’m supposed to meet. Jon spent years training with indigenous shamans here, and last night I interviewed two young indigenous shamans — Vilma and Wilson — who come from lineages of shamans on both sides of their families. What I learned from them is worthy of a whole other blog post!
What I found most intriguing about the shamanic approach to health and well-being is that they practice EXACTLY the kind of “whole health” I wrote about in Mind Over Medicine. When they assess a patient, they’re not just looking at the physical signs and symptoms, they’re both asking about and intuiting the state of the patient’s spiritual connection, their relationships, their work life, their financial situation, and how they fit into the community. They’re assessing for signs of “soul sickness” as a predisposing factor to physical illness and mental illness, and their treatments take all of these factors into account. By their own description, Vilma and Wilson are at once the village’s doctors, priests, psychologists, life coaches, and spiritual advisors. These are the roles physicians have traditionally played in the past, and it’s only lately that modern medicine has decided that illness lies only in the domain of the biochemical and material.
Vilma and Wilson told me they were willing to share their knowledge with me because now is the time. I told them we need the wisdom of ancient cultures now more than ever. They said, “And we need you.”The marriage of ancient wisdom with modern technology is where true healing lies, and when we’re willing to combine the tools I learned in medical school with the tools Vilma and Wilson learned from their ancestors, we have a recipe for miracles that can benefit us all. . . .
The Prophecy of The Condor & The Eagle
One Peruvian named Alberto told me the ancient Amazon prophecy of the Condor and the Eagle. The path of the Condor (represented, he said, by South American indigenous cultures, such as the Q’eros of Peru) is the path of heart, of intuition, and of the feminine. The path of the Eagle (represented by the Northern Hemisphere, and particularly cultures such as the US) is the path of the mind, of technology, and of the masculine.
The prophecy says that the 1500’s would begin a 500 year period during which Eagle people would rise to power and dominate Condor people, driving the Condor people to virtual extinction. After that 500 year period of destruction of heart, intuition, and the feminine, a new 500 year period would begin, when the Eagle and the Condor would come together and fly in the same sky, birthing a new consciousness for humanity and Pachamama (Mother Earth).

Now is the time for the Condors and Eagles to join hands and uplift the ancient and the modern, the feminine and the masculine, in perfect harmony. Are you on board to help make this happen?

Guest writer for Wake Up World