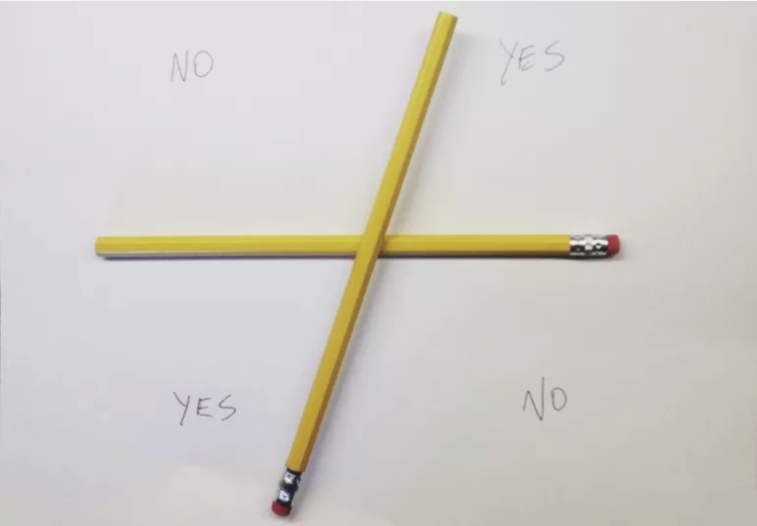 You never know when you might need to contact a demon, right? But what’s the best way to do that? Don’t worry, Twitter will show you how. Just search for tweets using the hashtag “#CharlieCharlieChallenge” and gain access to literally thousands of Vines and YouTube videos demonstrating a simple procedure for interacting with an alleged “Mexican demon” by the name of Charlie.

Make Sure You Say Goodbye

The reactions of those videoed performing the challenge range from nervous giggles to outbursts of profanity to uncontrollable shrieks before dashing out of the room. They’ve clearly bought into the demonic scenario described in this viral Tumblr post:

Charlie, Charlie is an old Mexican game, a traditional spiritual performed to contact a ghost by the name of Charlie. What people don’t know whos not educated on paranormal research and demonology, everybody is not coming in contact with a friendly ghost name Charlie, but yet several demons. These demons that are being contacted may seem friendly at first, but have sinister plans. If you do not say goodbye to “Charlie” you will experience paranormal situations as in hearing voices, things being moved, shadows, sinister laughing, and more depending on the atmosphere. This game is not safe and I advised nobody to play this game unless they are educated and know what to do because if you do not say goodbye to Charlie you are inviting the demon along with chaos into your home. SPREAD THE WORD, Charlie is not a friendly Casper it is a powerful DANGEROUS demon. To say Goodbye: to break contact with Charlie’s spirit you must chant, “Charlie, Charlie can we stop.” When the pencils move either upwards or inwards, drop the pencils on the floor and finish by saying goodbye. If you do not say goodbye to Charlie you are leaving a portal open for demons to come in and out of your house as they please. These demons will cause chaos and you might possibly even channel an poltergeist (which is the very last thing you want in your life) I advise doing a cleanse afterwards for safe keeping. Now, if Charlie says no and doesn’t want to stop playing still go through with the directions I just gave you, and say a prayer and hope that you actually break contact with the spirit being summoned. DO NOT RUN AWAY WITHOUT SAYING GOODBYE.

That’s all rather scary if taken at face value, but is any of it true? Take the claim that the “Charlie Charlie” game is Mexican in origin. According to BBC Mundo correspondent Maria Elena Navez, it is not. “Mexican legends often come from ancient Aztec and Maya history, or from the many beliefs that began circulating during the Spanish conquest,” Navez is quoted as saying on BBC.com. “In Mexican mythology, you can find gods with names like ‘Tlaltecuhtli’ or ‘Tezcatlipoca’ in the Nahuatl language. But if this legend began after the Spanish conquest, I’m sure it would’ve been called ‘Carlitos’ (Charlie in Spanish).”

She’s right. we’ve not found any references in texts on Mexican folklore to a demon named Charlie (or Carlitos), or traditional games or rituals involving the summoning of said demon. Some of the online videos feature people speaking in Spanish, and in a few of those the name “La Llorona” (from the famed Mexican ghost story) is invoked instead of “Charlie,” but that doesn’t make the pencil ritual a “Mexican tradition.”

An “Old” Tradition by Internet Standards Only

The oldest mention we’ve found of anything resembling the Charlie Charlie Challenge was a question posted on Yahoo! Answers in 2008:

Who has heard of the game “Charlie, Charlie” ?
You say, “Charlie, Charlie, can we play?” you play like this: you grab 6 pens, pencils, markers….3 for each person. you put 2 pens facing down in your hands and another pen horizontaly in the bottom. u and your friend both do this and hold them together STEADILY. you ask “charlie, do you want to play?” if it moves inwards, it means yes, outwards means no.
it was a big thing @ my school, and i came home and played it w/ my mom, and my mom and dad got all mad and said that the game was just like the wuigi board.
supposedly its a call to the devil….
is it? have you played it b4? tell me about it!

Note that in the above variant six pencils (or pens, or markers) are called for, and the players hold them in their hands instead of laying them crosswise on a sheet of paper (a 2014 video shows two kids playing that version of the game).

The oldest video we’ve found is dated September 26, 2008, and features the more familiar version of the game, though the name “Charlie” is never uttered in it.

So, why does the pencil move? Is it a demon or someone else trying to make contact with “the spirit world,” or can the phenomenon be explained in more ordinary terms? It’s easily the latter. For one thing, the pencil doesn’t always move. When it does move, it could be caused by a slight breeze, someone breathing or blowing on it, or the mere fact that one pencil is balanced so precariously on top of the other in the first place. As in any case where science can sufficiently explain why a phenomenon occurs, there’s no reason to assume supernatural forces are at work.

Becoming a Spiritual Medium: 10 Things I Wish Someone Had Told Me When I First Started

Are you on the right path? This is what Kevin Reed says…