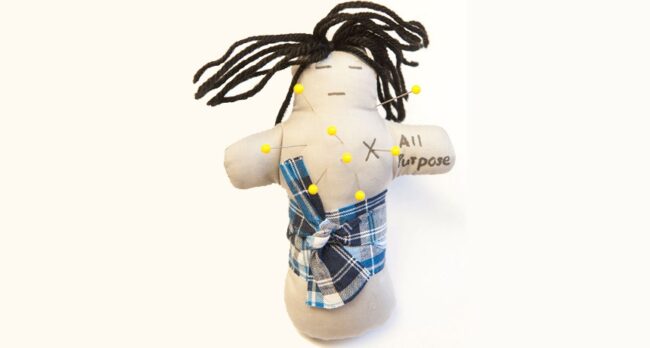 To test the association between blood sugar levels and aggression, participants in a recent study were given voodoo dolls representing their spouses. When people had low blood sugar around stabbing time, volunteers went through a lot of pins.

When social psychologist Brad Bushman handed out voodoo dolls to 107 married couples, he knew those dolls were in for a lot of stabbing.

Each married person who volunteered for his study got a doll and 51 pins. Bushman and his fellow psychologists instructed the volunteers to stab a doll, representing their spouse, each night with more pins depending how angry they were with their spouse. When people had low blood sugar around stabbing time, they went through a lot of pins.

“Self-control of aggressive impulses requires energy, and much of this energy is provided by glucose derived from the food we eat,” Bushman and his colleagues wrote April 14 in the Proceedings of the National Academy of Sciences. “People are often the most aggressive against the people to whom they are closest — intimate partners.”

Really teed-off husbands and wives could shove all 51 pins into the voodoo doll. Couples participated together, and got $50 each. But I would bet that most of them would have done it just for the doll.

Voodoo dolls, you see, turn out to be a great measure of aggression. Researchers like standard methods to measure even the most untamed variables, like aggression. They need to compare results across different studies. But just asking people how aggressive they feel gives results all over the map, so how does one define how aggressive someone is, in a way that’s repeatable and can be compared across any groups of people, anywhere, anytime?

The best bet for aggression research, a team of researchers reported last year, is the Voodoo Doll Task. As in the blood sugar study, people are given a doll that represents a specific person: either someone they know or someone who has provoked them in some way. Sometimes the doll might be virtual, and whether real or on a computer screen, participants are told they can stab the doll with as many real or virtual pins as they want.

Before the Voodoo Doll Task, researchers had cooked up various other aggressive acts for people to launch at one another in a laboratory setting. Among these was the Hot Sauce Paradigm. Participants armed with bottles of hot sauce are told to squirt as much as they want on a piece of food that another person (who, they are led to believe, can’t stand spicy food) will have to eat in its entirety. The more hot sauce they hose down the food with, the more aggressive they are deemed to feel.

The test worked pretty well. But today the Hot Sauce Paradigm, like so many paradigms, has somewhat fallen by the wayside. For the ruse to work, the subjects can’t know each other well enough to realize, in some cases, that the subject of their hot-sauce torture actually loves spicy food. Plus, a lot of psychology research is done over the Internet these days, and even with cloud computing, you still can’t transmit hot sauce over the Internet.

Ah, but voodoo dolls. Not only can you furiously stab a voodoo doll in the privacy of your home, you also don’t have to be anywhere near the subject of your aggression. (In fact, in the study of hangry spouses, the spouses were directed not to do their stabbing in front of each other. One can only imagine the escalating retaliation the poor dolls might have endured otherwise.)

It all works because of another idea that goes back even further in psychology research: magical thinking. In 1986, Paul Rozin (incidentally, the “father of disgust research”) of the University of Pennsylvania and colleagues reported in an influential paper in the Journal of Personality and Social Psychology that two “laws of sympathetic magic” described in the early 1900s for magical belief systems of traditional cultures also hold true for modern American culture.

One law is contagion, the transfer of properties between objects that makes celebrity-owned objects sell for gobs of money on eBay. The other is similarity, the idea that an image of an object equals the object. It makes poop-shaped chocolates a poor business venture, and it makes voodoo dolls satisfying even without any belief whatsoever in Haitian religious rites or even the supernatural.

So stabbing a doll is an excellent measure of aggression precisely because, somewhere deep in our lizard brains, we feel as though we are actually stabbing our husbands and wives, our friends and neighbors.

And yet all this pin-poking is ultimately for a good cause. As the proponents of the Voodoo Doll Test argue, aggression is pervasive in human relationships: In the 40 years after World War II, Earth enjoyed a grand total of 26 days of world peace, without international war (there was only the intranational kind). A reliable measure of aggression helps researchers understand why and when people get aggressive, which hopefully can guide ways to reduce aggression.

So if you’re ever handed a voodoo doll in a laboratory, don’t feel bad about stabbing away. It’s for world peace.

11 Unforgettable Pieces of Life Advice (In Just 6 Words Each)

Kevin Reed’s thoughts on the power of one second!