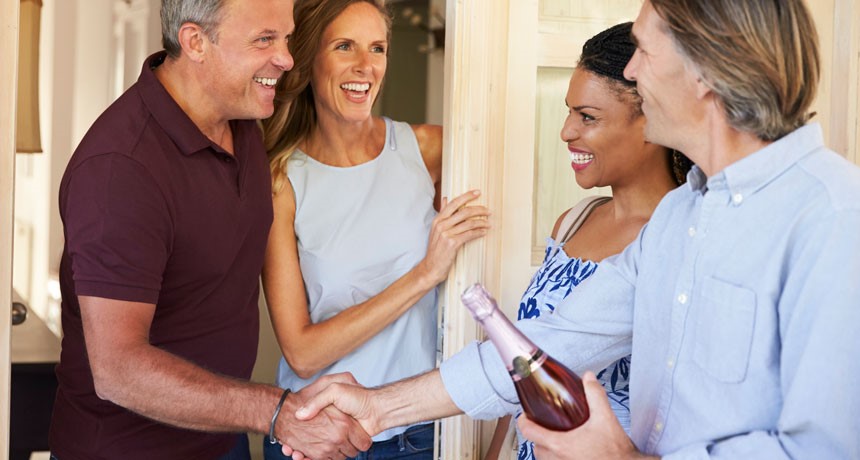 The finding might have implications for crime scene investigations, researchers say

DNA DISPERSAL Shaking hands or touching objects leaves some of your DNA behind. Other people may unwittingly spread your left-behind DNA to something they touch, even if you never laid a finger on the object, two studies suggest.

BALTIMORE — A 10-second handshake could transfer a person’s DNA to an object that the person never touched.

In handshaking experiments, people who never picked up a knife became the major source of DNA on the handle about 7 percent of the time, forensic scientist Cynthia Cale reported February 21 at the annual meeting of the American Academy of Forensic Sciences. That DNA was transferred to the knife when the person’s handshaking partner grasped the handle.

In a separate study, the last person to touch an object such as a communal pitcher was often not the one who left the most DNA behind, Leann Rizor, a forensic anthropologist who did the work at the University of Indianapolis, reported at the meeting.

The findings suggest that even brief contact with another person or object could spread DNA far and wide, which could complicate crime scene investigations. While the results don’t mean DNA evidence is unreliable, Rizor and Cale said, investigators should be careful to account for these accidental transfers.

In real-world situations, it’s probably rare to find people’s DNA in places they’ve never been or on an object they’ve never handled, says forensic geneticist Mechthild Prinz of John Jay College of Criminal Justice in New York City. Left-behind DNA is usually unstable and breaks down with time, she says. “We can’t discount [the idea],” she says, “but we shouldn’t use it to throw the evidence out in every single case.”

Previously, Cale, of the Houston Forensic Science Center, found that shaking hands for two minutes could transfer one person’s DNA to an object by way of the other person’s hand. But many critics said that two minutes is an unrealistically long time for a handshake. In the new experiments, Cale shortened the handshaking time to 10 seconds. Even briefer contact might also transfer DNA, she said.

In Rizor’s experiment, four University of Indianapolis students sat around a table and poured beverages from a communal pitcher. Other students watching the experiment were free to leave the room, talk and move around to simulate conditions in a restaurant. As each student at the table handled the pitcher and a plastic cup, researchers swabbed the pitcher handle, cups and the students’ hands for DNA.

DNA from students at the table was on the pitcher handle and on each other’s cups, even though the volunteers handled only their own cup and the pitcher. What’s more, DNA from other students in the room showed up, too, but none of the observers had touched the students at the table or the pitcher or cups. Observers’ DNA may have spread to the cups and pitcher through tiny spewed droplets as the onlookers talked, coughed or sneezed.

Looking at the amounts of DNA left behind on the objects, the researchers couldn’t determine who handled the pitcher last, nor could they pinpoint how long a person touched the pitcher or cup. The results demonstrate that DNA can transfer easily in social settings and in unpredictable ways, Rizor said.

Some of those results may be explained because people shed DNA at different rates, Prinz says. But it’s still not clear how often that type of transferred DNA might skew crime scene investigations, she says. “We’re all still trying to get a handle on how realistic this is.”

Here’s what your horoscope predicts for you this February…