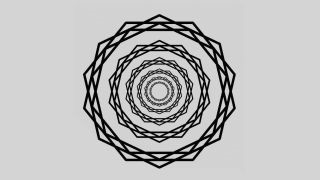 A new type of mind-bending visual illusion makes people see dazzling rays that aren’t really there at all.

The newly discovered illusion, nicknamed the “scintillating starburst,” is made up of a simple pattern of concentric wreaths on a plain white background. However, almost everyone who looks at it can see bright rays, or beams, emanating from the center of the design, like sunlight bursting through clouds. The viewer sees these non-existent rays, because the brain “connects the dots” between certain points in the wreaths.

Michael Karlovich, a visual artist with a background in neuroscience, created the scintillating starburst as the logo for his design company, Recursia Studios, in 2019.

“When I first saw the illusion I created, I instantly had a hunch I was looking at an effect I had never seen before,” Karlovich told Live Science. “I was pleasantly surprised, but ultimately confused as to what the mechanism underlying the effect could be.”

To find out more, Karlovich teamed up with Pascal Wallisch, a psychologist and data scientist at New York University, to conduct a scientific study on the design.

The scintillating starburst design is made up of concentric wreaths, each made up of a pair of star polygons, which are in turn made out of two heptagons (seven-sided polygons) that bisect each other. The star polygons are arranged so that the bisecting heptagons in each one line up to create narrow intersection points in the wreaths. Viewers see these intersection points in the wreaths as “bright points,” or dots, in their periphery because those points are the thinnest part of the wreaths. Because the bright points of each concentric wreath overlap with each other, the brain creates the rays between them even though there is no change in the background color.

However, this effect is fleeting, and if you rapidly move your eyes across the design the rays briefly disappear or get stronger, depending on where you are looking.

Visual illusions that trick the brain into seeing something that isn’t there are not a new phenomenon, but the way this particular illusion works has not been studied and documented before.

“There has never been a demonstration of illusory rays spanning through the background of a design,” Karlovich said. “All other illusions involving illusory lines are confined to grid designs.”

Grid designs, such as the Hermann grid illusion, lend themselves to creating this type of effect because it is much easier to create eye-catching bright points at intersections in the grid.

The Hermann grid illusion, dark spots appear at grid points even though they do not really exist.

The Hermann grid illusion, dark spots appear at grid points even though they do not really exist. (Image credit: Shutterstock)

“However, here we have an example where the brain is constructing illusory rays through non-grid regions, which should otherwise be empty,” Karlovich said.

Karlovich and Wallisch experimented with many different configurations of the scintillating starburst to determine which aspects most influence the effect.

They first experimented with the size of the illusion. “As far as we have studied, once the design is sufficiently large enough to render the illusion visible the effect is scale-invariant,” Karlovich said. However, they suspect that the effect may break down if it is tried on a much larger scale than they studied.

The experiments also revealed that spinning the design made the ray effect stronger, Karlovich said. The strength of the effect also increased with more wreaths in the design, he added.

The rays become stronger as the illusion spins.

The rays are visible regardless of what color the lines and background are as long as they contrast, the researchers found. This can also make the rays change color; for example, putting white wreaths on a black background makes people see much darker, but equally bright, rays.

“Our preliminary pilot experiments with color suggest what is most important is that there should be a high amount of contrast between the color of the background and the color of the lines making up the design,” Karlovich said. “The higher the contrast, the stronger the rays.”

Filling in the gaps

As well as serving as the logo for Karlovich’s company, the researchers believe that the scintillating starburst has further research potential.

“Like other illusions, the scintillating starburst could hypothetically be used as a stimulus in future studies regarding cognition and vision,” Karlovich said.

No, you cannot heal your own chakras!

Make a Traditional Dreamcatcher With This Simple DIY Tutorial