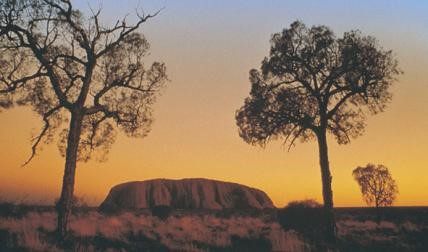 For the Aboriginal people of Australia, spirituality and an ongoing connection with their spirit ancestors have been a fundamental part of life for tens of thousands of years. In an interview with Australian journalist Lynda Flower, Aboriginal senior man and academic Michael Williams (pictured) gives a fascinating insight into the rich spiritual heritage which links past and present with unbroken continuity.

Michael Williams was born into the Goorang Goorang peoples of the South East Queensland area. He has had a long career in public life, mainly in the tertiary education sector, and has recently retired as Director of the Aboriginal and Torres Strait Islander Studies Unit at the University of Queensland after almost 20 years.

He is currently working independently as a consultant and holds an honorary position as an Adjunct Professor in the School of Social Science at the University of Queensland where he continues his research interests.+63 He is also a long-serving member of the Council of the Australian Institute of Aboriginal and Torres Strait Islander Studies (AIATSIS) in Canberra.

Michael has maintained a strong interest in the cultural and spiritual life of his people throughout his life, from spending hours listening to stories as a child through to his continuing interest as an adult in researching family history with his nuclear and extended families. This research has led him (at the age of 50) to being accepted into Aboriginal Law/Lore in the Central Desert region of Australia where he follows ceremonial and cultural life through several annual visits.

What do you consider to be the most important aspects of Aboriginal spirituality?

How do Aboriginal perceptions of spirituality differ from western interpretations?

A profound connectedness to land. Living on your land is essential to maintaining the strongest possible links with land and ensuring proper practice of Aboriginal spiritual life.

What do you think is the biggest misconception about Aboriginal spirituality?

People try to make sense of it from their own perspective [spiritual] and do not often open themselves up to knowing it from the inside. This is not unusual or surprising. This is an ancient spirituality embedded in a culture that is acknowledged as being the longest continuously surviving culture in the entire world. By the time the British and others arrived on Australian shores they had long-established behaviours relating to indigenous cultures. With this entrenched behaviour, coupled with Christianity and missionary zealousness, there was little chance of Aboriginal spirituality being assessed from a standpoint of respect and a desire to understand it on its own terms.

Is Aboriginal spirituality today different from what it was in the past. How has it changed (or not)?

The spirit has not changed. The Law lies in the land and the spirits of our ancestors have continued to inhabit the landscape during ancient times, during periods of colonisation and after our peoples have been removed from their lands. Human engagement with Aboriginal spirituality is now challenged by the intervention of other spiritual and religious beliefs and doctrines, as well as the demands of a world filled with technology that infiltrates every corner of human existence. It is now increasingly hard, except for the committed individual, to stay true to the old ways. Moving in and out of vastly different domains requires discipline of a high order, but many do so by staying on land.

What lessons can us ‘white folk’ learn from Aboriginal spirituality?

Simply be. Respectful attention to a commitment to a spiritual path will bring what is meant to be. Don’t have expectations. If it is meant to come your way – it will. Stay on task. The spiritual domain and practices of the longest continuously surviving culture in the world must have something to offer humanity. Limit the overlay of other spiritual traditions and try to let Aboriginal ways stand for themselves.

What have been the most important spiritual lessons you have learnt as an Aboriginal man?

Never doubt the presence of spirit and the ability of old ones who have passed to be there for you. Ask and they will come and ‘show’ themselves in some way. The land is alive with the spirits and presence of our ancestors and creation heroes.

What works best for you/what do you do when you need some spiritual upliftment?

Go to my Homeland – visit my traditional lands. I engage with my old ones every day and ask for their guidance.

In your 30 years of university teaching, were there any spiritual (or other) changes you noticed in students undertaking Aboriginal studies?

In my experience, the vast majority of students who showed some resistance at first end up thoroughly enjoying the course and go on to take other Aboriginal studies courses as electives.

From all your years of experience, what spiritual advice would you pass on to others?

Never doubt the existence of spirit and of a Creator – however you may wish to term it. Spend time regularly (daily) pondering the importance of a spiritual approach to life and take time to care for others and all things. Respect Planet Earth and the Universe.

Where do you see (or hope to see) Aboriginal spirituality heading in the future?

It is here, always has been here and remains. The spirit never leaves the land. People leave the land. In my experience the spirit presence in my traditional homeland has become more overt since my mother died and there has not been anyone living there permanently.

I notice them when I visit. It demands that I establish a more active presence there.

• This interview first appeared in Spiritual Space Magazine, Australia, and is reproduced by kind permission of Lynda Flower.

How to Dissolve Negative Emotions into Emptiness

Your Monthly Horoscope for October 2020