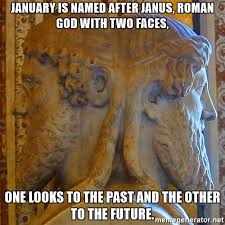 As many of us start to think about our New Year’s resolutions (or breaking them), we may not realize that the tradition of making promises on the first day of the year is a custom started by our Roman ancestors.
“Rome’s highest officials made a resolution to remain loyal to the republic and swore oaths to the Emperor on 1st January,” said Professor Richard Alston, from the Department of Classics at Royal Holloway University.
“A grand ceremony marked the occasion, where the Roman legions would parade and sacrifices were made on the Capitoline Hill. This annual event renewed the bonds between citizens, the state and the gods.”
New Year’s Day offered all Roman citizens an opportunity to reflect on the past and look to the year ahead. People would exchange sweet fruits and honey, greet each other with blessings for the coming year and the courts only worked in the mornings, so they had a half day holiday.
“On 1 January, our Roman ancestors celebrated Janus, the god of new beginnings who had two faces — one looking into the past and another looking to the future,” Professor Alston added. “Janus represented doors and thresholds and the Romans named the month of January in his honour.
“Janus also symbolized the values of home, family, friendship and civilization, and the doors of his temple were closed when Rome was at peace and thrown open in times of war, as if the god was no longer present. Just like we do today, we also know that the Romans celebrated a mid-winter festival in which they met with friends, exchanges gifts and had a good time before the start of the year ahead.”
________________________________________
Story Source:
Materials provided by University of Royal Holloway London. Note: Content may be edited for style and length.

The Psychic Café first meet for 2019