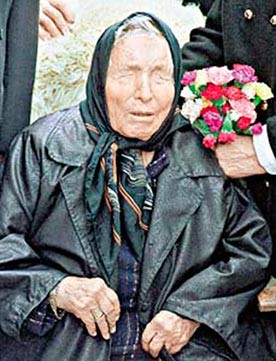 SHE DIED nearly 20 years ago, but Baba Vanga (pictured below) – “the Nostradamus of Bulgaria” – is still making headlines, though as far as we know that’s not something she predicted.

What has caught the world’s attention, however, is a claim that the blind psychic predicted that Muslims would invade Europe in “a great Muslim war” that would end with the establishment of an Islamic caliphate by 2043.

The rise of Isil, of course, has led to this particular prophecy receiving widespread publicity in tabloids and more conservative newspapers, on the internet and in other media around the world.

The problem for anyone prepared to take these claims seriously is sorting the hype from reality. She was clearly highly regarded during her lifetime, judging by those who are said to have consulted her, but finding confirmation that she actually made these prophecies is almost impossible.

There appears to be no written record of her global pronouncements, so it seems those that are now making headlines have been handed down by word of mouth.

The other problem is that, like French seer Nostradamus’s quatrains, they can be interpreted only after an event.

For example, she is said to have declared: “Horror, horror! The American brethren will fall after being attacked by the steel birds. The wolves will be howling in a bush and innocent blood will gush.”

That is now seen by some as an accurate prediction of the 11 September terrorist attacks.

“Cold regions will become warm … and volcanoes will awaken” is said to be her prophecy of global warming.

And, “A huge wave will cover a big coast covered with people and towns, and everything will disappear beneath the water. Everything will melt, just like ice” was apparently a forecast of the Boxing Day tsunami which killed hundreds of thousands of people.

However, as the Independent pointed out (10 December, 2015), many of the people who were close to her have claimed she never made some of the prophecies now attributed to her on the internet.

Born Vangelia Pandeva Dimitrova in 1911, she lost her sight after being lifted up by a tornado and thrown into a field. She was found days later, very frightened, with her eyes covered in sand and dust. Her eyesight never recovered and gradually deteriorated until she became blind.

Baba Vanga’s psychic abilities had manifested by the outbreak of World War Two when she was in demand from people hoping she could help them trace their lost relatives. In time, her reputation attracted dignitaries and other influential people, including Bulgarian politicans and leaders from various Soviet republics.

Even Leonid Brezhnev is said to have consulted her, and Boris Yeltsin’s press secretary Sergey Medvedev did so as his boss’s envoy.

To put her psychic abilities into perspective, it should be noted that her prophecies have been interpreted as predicting, correctly, that the 44th President of the USA would be African-American. But she also said he would be the last. It won’t be long before we know the answer to that.

The Bulgarian seer is also said to have predicted nuclear war between 2010 and 2016 which she believed would lead to the abandonment of Europe. Another prediction attributed to her is that aliens would help civilisation live underwater by 2130 and there would be a war on Mars in 3005. Some you win, some you lose.

Those wishing to know more can consult “The Great Encyclopedia of Vanga”, an online project devoted to the prophetess (vanga.ru). You’ll need a knowledge of Russian to read it, or you can ask Google to translate it for you, though the accuracy is not likely to be any greater than Baba Vanga’s predictions. – Editor

How Many Hidden Numbers Can You Find In This Puzzle?