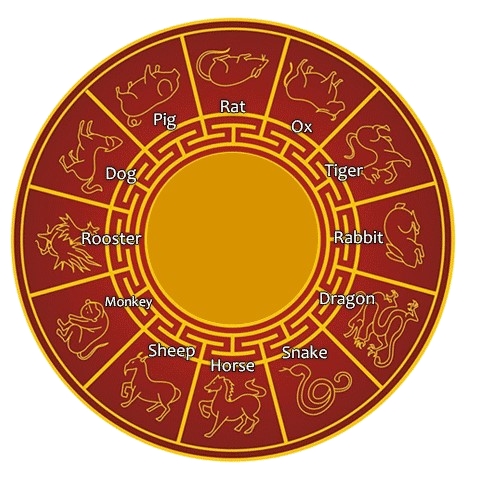 Like the western 12 astrology signs, the Chinese 12 zodiac animal signs also provide guidance on people’s love match and personality analysis, while the difference lies in the time division: western astrology signs are marked by 12 months according to Gregorian calendar, while Chinese animal signs are defined by a 12-year circle.

Now, use the calculator: select your Gregorian date of birth, and you’ll reveal your date of birth according to lunar calendar, together with your Chinese zodiac animal sign.

Based on Chinese Lunar Calendar

Chinese animal sign (Shengxiao) follows the 12-year cycle defined by lunar calendar. Each year in the cycle is represented by one animal, and people’s sign is determined by their birth year. The cycle repeats every 12 years with the order like this: Rat, Ox, Tiger, Rabbit, Dragon, Snake, Horse, Sheep, Monkey, Rooster, Dog and Pig. For example, 2018 is a Year of the Dog and 2019 is a Year of the Pig.

Click the animal signs to learn more about their basic facts including birth years, luck signs, and love matches.

Two Dividing Methods for the Zodiac Year
The most common-seen method depends on Chinese New Year, which is considered as the division of two animal years. When a lunar year comes to an end, the animal will shift to next one. Chinese people’s animal signs are marked by this method.

The other method is calculated on solar calendar. In China, one year can be divided into 24 solar terms, which are used to indicate the climate change and guide the schedule of farming work. The Lichun term (Start of Spring) comes first, which falls on February 4 or 5. Passing that day, a new animal year starts.

Nowadays, the zodiac defined by lunar New Year’s Day is rooted in Chinese astrology culture, which is widely used in lucky date selection and love compatibility tests. If you have got your sign through the calculator, discover more about your Love Compatibility.

Horoscope 2021: Astrological predictions for the New Year, what’s in store for Leo, Virgo, Scorpio, Sagittarius and other zodiac signs