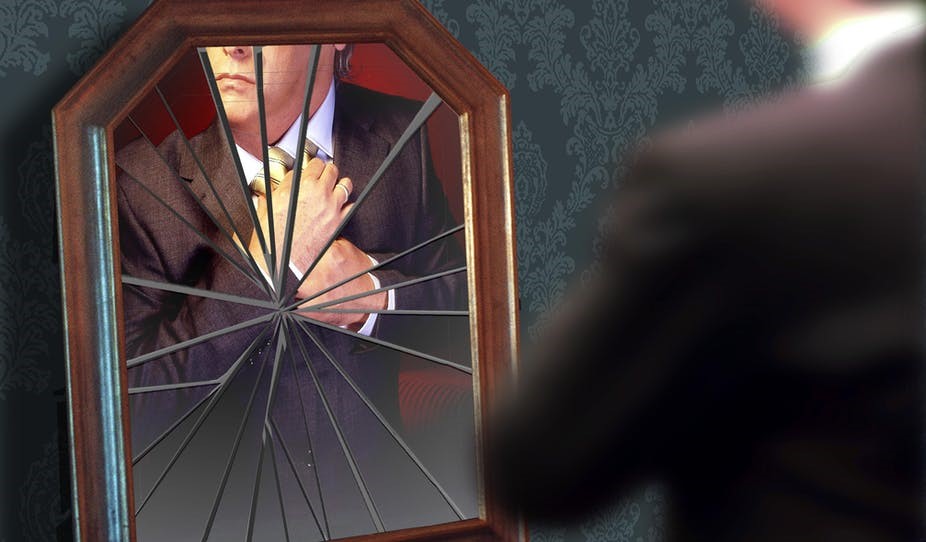 Every human culture has superstitions. In some Asian societies people believe that sweeping a floor after sunset brings bad luck, and that it’s a curse to leave chopsticks standing in a bowl of rice. In the U.S., some people panic if they accidentally walk under a ladder or see a black cat cross their path. Also, many tall buildings don’t label their 13th floors as such because of that number’s association with bad luck.

The origins of many superstitions are unknown. Others can be traced to specific times in history. Included in this second category is a superstition that is between 2,000 and 2,700 years old: Breaking a mirror brings seven years of bad luck. It so happened that in both ancient Greece and the Roman Empire, reflected images were thought to have mysterious powers. It is likely in one of these times and places that the broken mirror superstition began its rise in popularity.

As a social psychologist who studies various ways that people influence one another, I am fascinated when groups generate beliefs that are pure “social constructions” without necessarily having any basis in reality. I argue that the superstition about broken mirrors may be rooted in these ancient beliefs.

The Greeks believed that one’s reflection on the surface of a pool of water revealed one’s soul. But it was Roman artisans who actually learned to manufacture mirrors from polished metal surfaces, and believed their gods observed souls through these devices. To damage a mirror was considered so disrespectful that people thought it compelled the gods to rain bad luck on anyone so careless.

Around the third century mirrors were being made from glass, and breakage became a lot more commonplace. But the Romans did not believe that the ensuing bad luck would last forever. They believed that the body renewed itself every seven years.

The belief that good luck would eventually return was surely comforting, and people have always tended to believe things that make them feel good, even when untrue.

The human mind continuously and unconsciously searches for useful patterns. For example, we survive by recognizing feeding patterns and put ourselves in the right places at the right times for meals. We also avoid injury or death when crossing a busy street by recognizing traffic patterns. Getting fed and avoiding being squashed in traffic both involve learning real cause-and-effect patterns.

Sometimes, however, our brains infer cause-and-effect patterns that aren’t real. Suppose that a friend gives you a “lucky penny.” You’re skeptical, but a few days pass and nothing bad happens. Though it’s only a coincidence, your brain may still infer a pattern, and you may begin to believe the penny caused the run of good luck. A superstition is born.

We also acquire superstitious beliefs during socialization, learning about them from parents and other trusted authorities while still young and open to a world full of magical possibilities. Then our superstitions circulate indefinitely among families and friends, reinforced by word of mouth, social media and mass media. The more people there are supporting the superstition, the more believable it will seem and the longer it will persist.

If a superstition happens to make us more cautious around mirrors, there’s no harm in that. More generally, superstitions can lower stress and improve performance when we find ourselves in difficult situations. They also can be fun and interesting to talk about, and promote group solidarity.

On the other hand, one does need to proceed with caution. Superstitions are false beliefs that can often produce anxiety and guilt. They can make us feel responsible for bad outcomes we didn’t cause, or waste our energy seeking untenable shortcuts to desired outcomes.

Common sense alone ought to be reason enough to deter us from smashing mirrors.

Crystals for a Wonderful Home