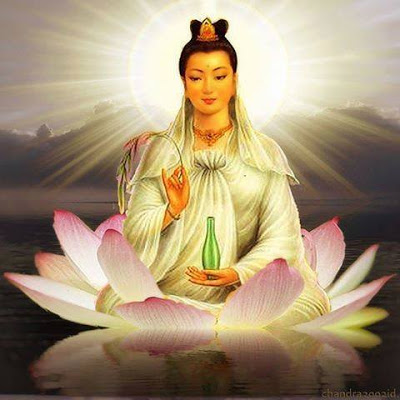 Wise is using skillful means, in every corner of the world, she manifests her countless forms

The 19th of February, in countries influenced by Chinese culture, is a day devoted to honoring Kuan Yin, goddess of compassion “ she who hears the cries of the world and restores harmony.” She is a goddess for the Taoists and a bodhisattva for the Buddhists but she represents the same values of compassion for both faiths. There has been mutual borrowing of symbols and myths between the two groups, as well as an identification with Mary in countries with a Roman Catholic minority such as Vietnam and with Tara among the Tibetans.

From the Taoist tradition, she is associated with running water and lotus pools. Many of her virtues come from Buddhist teachings:

“Wrathful, banish the thought of self

Win all, by simply letting go.”

Yet Kuan Yin is associated with active compassion as a driving force of action, where all, including the least of living things, are treated with fairness and consideration and where the broader currents of life move toward harmony and equilibrium.

While most of the myths and ex-voto paintings found in temples show Kuan Yin helping individuals in times of stress or danger, there is also a broader, more political-social aspect to her efforts to restore harmony and balance. Today, at a time when humanity is increasingly working together to meet ecological challenges and to overcome ideologically-led strife, the spirit of Kuan Yin presents to us an important call for a cultural renaissance based on the concept of harmony. Rather than concentrating primarily on conflicts, struggles, and suffering, the spirit of Kuan Yin suggests that the focus should be on cooperation and visions of a better future. Harmony includes tolerance, acceptance, equality, and forgiveness of past pains and conflicts. The spirit of Kuan Yin leads to gentleness, patience, kindness, and inner peace.

We are fortunate to be able to participate in a crucial moment in world history when the law of harmony, that is the law of equilibrium, is being increasingly recognized and understood. Harmony is the key to our ascent to the next higher level of human consciousness: harmony between the intellect and the heart, the mind and the body, male and female, being and doing.

The efforts to restore harmony can often be long for there are structures and institutions which, though lifeless, take a long time to crumble. One needs patience. Yet, there are, at times, unexpected breakthrough and shifts. Thus, one must always be sensitive to the flow of energy currents.

Thus as we mark 19 February to honor Kuan Yin, we also develop a new spirit of cooperation for the creation of a cosmopolitan, humanist world society. Social harmony is inseparable from the values of respect and understanding, of goodwill, and of gratitude toward one another.

René Wadlow is a member of the TRANSCEND Network for Peace Development Environment. He is President of the Association of World Citizens, located in Geneva, Switzerland, an international peace organization with consultative status with ECOSOC, the United Nations organ facilitating international cooperation and problem-solving in economic and social issues, and editor of Transnational Perspectives.

One in four girls is depressed at age 14

Guide To The Classics: The Prophet by Kahlil Gibran