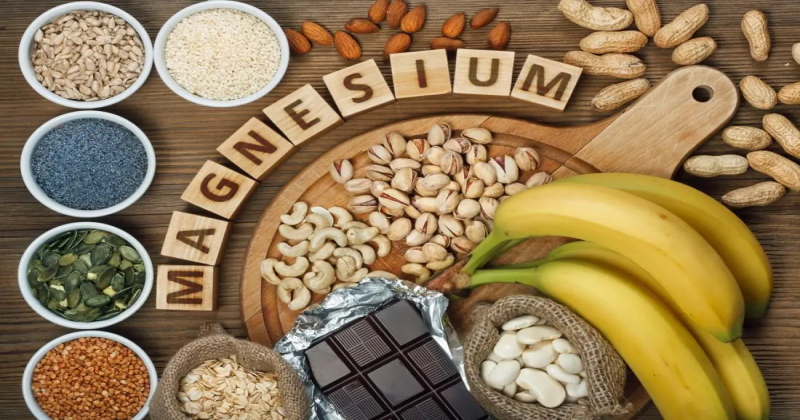 Mix more magnesium into your diet, and you may be surprised how much your body will thank you…

Essential and elemental, magnesium works nothing short of miracles when it comes to your health. Necessary for more than 300 enzymatic reactions in the body, it plays a chief role in regulating blood glucose levels and blood pressure, and it even ensures the conductivity of electrical impulses for a regular heartbeat. Among its other essential roles, magnesium synthesizes proteins, ensures proper muscle contraction, and aids in increasing bone density. It’s also a major player in healthy brain functioning.

However, about 68 percent of Americans suffer from magnesium deficiency. Because it’s a macro mineral, large doses of magnesium must be consumed frequently to avoid deficiency. Gaining a thorough understanding of the impact of a magnesium-rich diet may help you assess whether you could be lacking sufficient intake. Increasing your consumption of magnesium-rich foods or supplements will only improve your health.

From individual cells to entire organ systems, magnesium plays a vital role in the health of the body. Within each cell, magnesium participates in the function of organelles, such as mitochondria, where it directly affects energy production. It helps to stabilize the cell membranes, allowing potassium, calcium, and sodium to flow in and out of the cell. For example, when magnesium gets depleted from the body due to excessive sweat, calcium isn’t able to flow out of muscle cells, leading to muscle cramping. Nerve cells depend on magnesium to regulate the correct levels of sodium and potassium within them; if they’re unbalanced, then anxiety, irritability, or migraine headaches can take over. Magnesium also influences cell receptor activity, facilitating numerous operations required for the creation of DNA, RNA, and the master antioxidant glutathione. The less magnesium in the body, the less efficiently it behaves.

Make No Bones About It

The body stores more than half of its magnesium in the skeletal system, while the rest resides in muscle and other tissues. When the body has consumed sufficient amounts of magnesium, calcium absorption in the bones activates vitamin D in the body. For this reason, some studies, such as the Women’s Health Initiative Observational Study, indicate magnesium may be more effective than vitamin D at preventing bone thinning. Therefore, women with an optimal magnesium intake have a lower risk of osteoporosis after menopause, and have increased density and quality of bone matrix. Perhaps more alarmingly, because the bones require magnesium in order to absorb calcium, insufficient magnesium intake forces the unabsorbed calcium to adhere to the arterial walls, or to harden into stones, which leads to cardiovascular disease and kidney stones.

An adequate magnesium intake, however, yields incredible results for cardiovascular health. The Framingham Heart Study, a joint project of Boston University and the National Heart, Lung, and Blood Institute, notes that in one of their studies, participants who took the highest levels of magnesium had a 58 percent lower chance of calcium depositing on their arterial walls compared with those who consumed the least amount of magnesium.  As a crucial electrolyte, adequate magnesium intake also reduces the risk of hypertension, and plays a direct role in regulating a normal heart rhythm, making it a mandatory mineral for heart health. In fact, The International Journal of Cardiology  reported in 2001 that patients with long-lasting episodes of a sudden, irregular heartbeat known as atrial fibrillation responded favorably to an injection of magnesium sulfate, which returned their hearts to a normal sinus cardiac rhythm.

Though the precise mechanisms by which magnesium protects the brain still require exploration, magnesium seems to be crucial for brain health. A strong, intact blood-brain barrier correlates with adequate magnesium levels. Other brain functions related to this mineral include the regulation of amyloid plaque, which potentially protects the body from Alzheimer’s disease. Multiple studies have concluded that people with dementia and Alzheimer’s disease have low blood levels of magnesium, and that magnesium-deficient mice are more prone to developing Parkinson’s disease. Other research shows that magnesium supplementation can improve cognition and slow the progression of Alzheimer’s disease, although such results aren’t consistent in literature. A 2011 study published in National Academies Press also suggests that magnesium protects against brain swelling and lowers instances of death in humans after stroke. In another study, magnesium was shown to facilitate spatial memory retention in rats.

Additionally, the brain requires consistent magnesium levels for neurotransmitters to work effectively in the body. For example, the neurotransmitter GABA requires magnesium in order to produce its calming effects. With enough magnesium, GABA can dominate the neurological landscape and keep the fear and anxiety neurotransmitter, glutamate, in check. Magnesium also helps synthesize the neurotransmitter dopamine, which stimulates motivation and feelings of reward. Without high enough levels of dopamine, symptoms of apathy, agitation, and depression tend to dominate one’s mood. Magnesium further aids in the maintenance of a positive mood by transforming the amino acid tryptophan into the mood-elevating neurotransmitter serotonin. A 2008 case study published in Magnesium Research  showed that senior citizen patients suffering from depression and Type 2 diabetes who were given magnesium glycinate during meals and at bedtime showed improvement in mood after 12 weeks.

A strong correlation exists between magnesium deficiency and Type 2 diabetes. Studies show that high levels of dietary magnesium reduce the risk of diabetes, due to magnesium’s instrumental role in the creation of insulin. Low magnesium aggravates insulin resistance, so regardless of whether or not magnesium deficiency precedes diabetes, it certainly intensifies the condition and increases complications.

Without enough magnesium, the body tightly regulates the availability of this element by reducing excretion of magnesium from the kidneys, and increasing absorption of the mineral into the body. Alternately, magnesium will get pulled from bones to maintain an adequate supply in blood and tissues. Chronic magnesium depletion can be caused by an increasingly poor diet, physical exertion, heavy alcohol consumption, and medications, such as oral contraceptives and heartburn medications. If you feel you might have a magnesium deficiency, it’s always best to check with your health care practitioner, and request a blood test. Your practitioner should help you analyze what constitutes a healthy range for your blood magnesium levels. Your health care provider or a licensed nutritionist can help you tailor your magnesium intake through diet, supplements, or a combination of both.

Over the past 50 years, magnesium consumption in the U.S. has declined for a variety of reasons. As a nation in general, we don’t regularly consume enough magnesium-rich foods, especially those of us who avoid eating leafy greens. The over-processing of whole foods removes vital magnesium. So a diet that consists largely of processed foods tends to be magnesium deficient. The current recommended daily allowance (RDA) for magnesium is 310 to 420 milligrams per day for adults, and it’s even higher for pregnant women. The standard U.S. diet contains only 50 percent of the RDA for magnesium.

Additionally, magnesium levels in topsoil have fallen due to depletion, erosion, and monocropping. By some estimates, magnesium content in various foods has declined by 25 to 80 percent compared with levels measured before 1950. Our grandparents also enjoyed more magnesium in their drinking water before it was removed from most municipal water sources.

The richest sources for dietary magnesium are leafy greens, seafood, avocados, whole grains, and nuts and seeds, such as pumpkin seeds, almonds, or cashews. Perhaps our most enjoyable source of magnesium is dark chocolate or cocoa powder. In fact, that may be the most common source of magnesium in the diet! Though the RDA for magnesium is over 300 milligrams for adults, those with deficiencies may find that consuming more than the recommended amount can increase its healing effects. Be sure to consult your health care provider for correct dosages.

Magnesium deficiency is widespread because the average diet doesn’t include enough magnesium-rich food. For those who are chronically deficient in magnesium, diet alone may not improve their health. Severe deficiency can manifest as hypertension, low bone density, muscle cramping, headaches, diabetes, anxiety, or insomnia, and a change in diet along with daily supplements may provide a safe, cost-effective intervention. It’s important to note that the gastrointestinal system absorbs some forms of magnesium supplementation better than others: Magnesium citrate, magnesium glycinate, and magnesium taurate don’t tend to upset digestion and are readily absorbed. However, it’s best to avoid magnesium oxide or magnesium carbonate, as these forms are poorly absorbed by the digestive system. As with all supplements, speak with your health care provider to learn what the supplementation, dosing, and contraindications may be for your specific condition.

Pharmaceuticals vs. Natural Remedies – Who Are The Real “Quacks” and “Snake Oil” Salesmen?