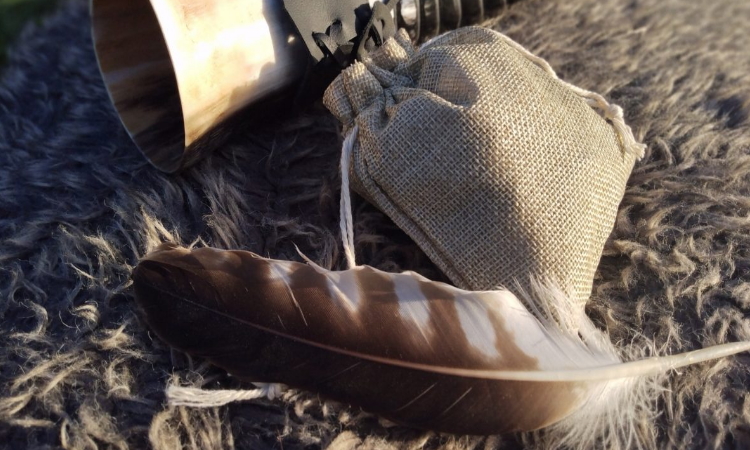 Ancient Northern European spiritual practices are accessible to people of all lineages. Explore how to connect with Norse paganism as a beginner.

Ásatrú, known more commonly as heathenry or Norse paganism, is a modern revival of the pre-Christian religions found in Northern Europe. Heathenry is an inclusive spiritual practice, open to all who are moved toward it, and is growing throughout the world. While practices vary across the globe, there are a few core tenets to Norse paganism that beginners should know.

Those who practice Norse paganism often refer to themselves as heathens. Heathens are polytheists, meaning they believe in and often worship more than one deity. The Northern European gods and goddesses have names that may sound familiar: Odin, Thor, Frey, Freyja, and Frigga, among others.

Although there are common Norse pagan practices across countries and traditions, there isn’t “one true” way of doing things. Some heathens will focus on just one or two of the dozens of deities and spirits in the pantheon, while others honour them all.

Heathens by and large see offerings as a way to develop reciprocal relationships with deities. In fact, most heathens will say “thank you” to the gods far more often than they ask them for a favour.

Some ways that beginners to Norse paganism can practice deity reverence:

Most heathens, particularly those that live in the United States, participate in some form of ancestor veneration and use the lives of their well ancestors as models for their own.

Ancestral reverence does not have to be complicated. Here are a few Norse pagan practices to help beginners connect with their ancestry:

Most heathens are animists, meaning that they believe everything has an inherent spirit. They even believe that the Earth itself is named: Jord, mother of Thor. It is difficult to be disrespectful of nature when one is an animist, which is why so many heathens are environmentally conscious.

Here are a few ways that beginners to Norse paganism can connect with the spirits of the land:

Generally, heathens focus on the present moment and act to the best of their abilities in each situation, without too much concern for what the afterlife may look like. Instead of having just one afterlife to strive for, there are several possibilities.

To name just a few of these possibilities: those who die in battle or combat are either taken to Folkvangr (Freyja’s home) or Valhalla (Odin’s hall), while those who die of old age make their way to Hel (the realm of the goddess by the same name, very different from the Christian hell). Each god has their own dwelling place, and those who are devoted to a particular deity may find their final rest in the home of said god.

Among other ethics, heathens believe in reciprocity and building positive relationships over time with both the gods and people. Hospitality is vital to heathens as a way to give back to their community. Norse pagan hosts may choose to offer:

During the Viking age, hosts offered their guests life-saving protection from both the elements and criminals. In the modern era, this translates to providing shelter and a place of acceptance.

Being Heathen in a modern context means that you are accepting of others while striving to be the best person you can be. In general, Norse pagans tend to be truthful, honourable, and strong-willed individuals who stand up for what they believe is right.

Heathens both then and now see all people as worthy of respect. They are accepting of all people, regardless of race, gender, and sexuality, and honour one’s chosen name and pronouns.

Sadly, there are groups that use Norse paganism to promote white supremacy and other hateful agendas. Mjolnir, the sacred heathen symbol of Thor’s mighty hammer, is often worn by neo-Nazis and other white nationalists. Beginners to Norse paganism should know that someone wearing or displaying Thor’s hammer does not necessarily share the inclusive beliefs of heathens.

Heathenry is a culture as much as it is a faith. Heathens feed their souls in many ways and enjoy pastimes both modern and ancient, often using traditional, pre-Christian Norse texts as inspiration. There are many subcultures of heathens:

Heathens believe in a concept called frith, or unbreakable peace. While heathens tend to love a hearty debate, they also agree to treat each other as they wish to be treated. People following modern heathenry find peaceful solutions to problems and work toward maintaining frith with others.

Heathens use the examples of ancient Northern European peoples, ancient texts like the Eddas and sagas, and even archaeological evidence to strive to better themselves. These ancient texts and findings provide heathens with practical ways to honour the gods, their ancestors, and land spirits in their everyday lives. Though these practices are ancient, Norse paganism is open and welcoming to beginners of all backgrounds.

Memo from your child