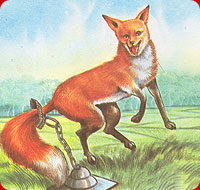 A fox was stealthily crossing a field. But alas, he got trapped. He tried hard to come out of the trap. At last he made it. But his tail got cut off. He was ashamed of his loss.

Back in the Jungle a few of his friends saw him without his tail and asked “What happened?”

The fox did not want to accept his ill fate. He said, “The tail is just an extra weight. I cut it off “. But his clever friends could guess the reality and they asked, “If that is the case, why are you sad”.

The fox did not know what to say now. He went away without giving an answer.

What Is Mindful Eating, And How Do You Practice It?