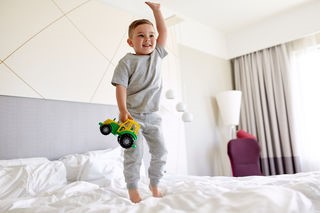 When it comes to toys, in terms of development and creativity, less is more.

Toys seem like an inevitable by-product of parenting. If your home teems with too many must-have fad items, toys, or gizmos that ever caught your child’s fancy, you’re not alone.

Now there is good news for parents who fear their children’s play areas resemble a toy store: A new study from the University of Toledo in Ohio suggests “an abundance of toys present reduced quality of toddlers’ play.” Having fewer toys can lead a young child to focus and engage in more creative, imaginative play, according to the study, “The influence of the number of toys in the environment on toddlers’ play” published in the journal Infant Behavior and Development. Fewer toys, it turns out, result in healthier play, and, ultimately, deeper cognitive development.

Researchers observed 36 toddler subjects between the ages of 18 and 30 months in free-play sessions. The toddlers were given either four toys or 16. “There was a significant difference in the quality of toddlers’ play between the two toy conditions,” the study reports. “As measured by sustained play and variety of manners of play, toddlers had a greater quality of play in the Four Toy condition compared to the Sixteen Toy condition.” Essentially, when given a few toys, the toddlers played with them in more varied ways and for longer periods of time.

The study echoes several experts who in recent years have advocated for streamlined, or even toy-free, play areas for young children. In his book Clutterfree with Kids, Joshua Becker describes too many toys as a distraction from development. “Imagine the impact that hundreds of toys in our homes may be having on our kids,” he wrote in response to the new findings.

Alexia Metz, one of the researchers in the Toledo study, notes that all the participants played under both conditions — four and 16 toys — on different days and in random order, so that the difference reflected the change in the environment and controlled to some extent for variability among children. When the children were given 16 toys, Metz and her colleagues were able to confirm the distraction and disadvantage: “The results of the present study suggest that an abundance of toys may create such a distraction. With fewer toys present [referring to the four toy group], participants engaged in longer epochs of play.”

The children with four toys exhibited one-and-a-half times more interactions with the toys, indicating that young children “are more likely to play in more sophisticated, advanced ways with fewer toys present,” according to the study. This increased involvement with a toy has positive implications for many facets of development, including imaginative and pretend play, self-expression, physical skills such as fine motor coordination, and problem-solving.

This isn’t to say that parents should toss their children’s toys or discourage play time. If you are, however, bending over backward or spending more than you would like on gifts for children, particularly very young ones, it may be worth pausing to ask: Does this child really need this item? Will it enrich her playtime — or simply be used for a week or two and then ignored?

No doubt you’ve heard a parent say, “My kids have so many toys, and they don’t play with them.” You have probably said it yourself.

Memories are more precious than presents.

When it comes to making your children happy, consider creating bonding rituals and traditions for children to look back on and cherish instead of automatically heading to the store to buy another toy or gadget. Have a monthly or weekly movie date or game night, a cookie bake-in, or make a ritual of preparing a weekend meal together.

Research backs up the notion that parents should invest in activities over material goods. Cornell University psychologist Thomas Gilovich found that people look back on experiences with more satisfaction than they do on their material purchases. He “discovered that people thinking about impending experiential purchases, such as ski passes or concert tickets, have higher levels of happiness than those who anticipate spending money on things.”
Elect to spend money on events or embark on free activities, such as walking around a park, heading to your local community center, taking a bike ride or doing a craft at home.

The secret to being cool: Try smiling

What Soul Searching Really Means & 9 Ways To Do It, From Experts