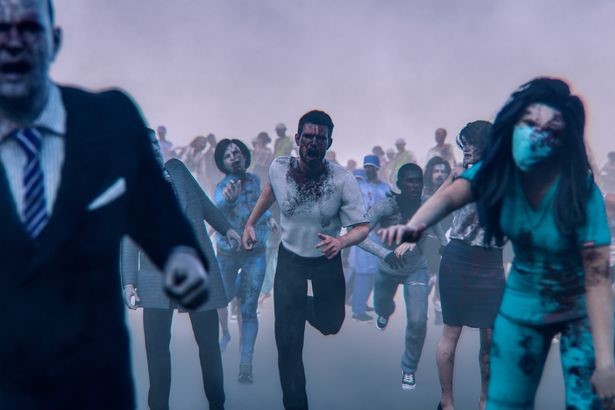 The French astrologer has made some spookily accurate predictions – from the Second World War to JFK’s assassination. Here’s what his writings tell us about what 2021 has in store

He’s the French astrologer and doctor who is said to have accurately foretold some of the most monumental events in the last few hundred years.

From the Great Fire of London to Adolf Hitler’s rise to power and the horrors of the Second World War and from the French Revolution to the creation of the atomic bomb, Nostradamus’s predictions have been eerily accurate.

He is even said to have known John F Kennedy would be assassinated and the 9/11 terror attacks on the World Trade Centre in New York would happen.

And Nostradamus has some terrifying prophecies for 2021.

He predicts everything from a zombie apocalpyse to a comet hitting earth and even solar storms.

Here were look at his top six propechies for what the next 12 months could have in store.

Nostradamus predicts there could be a zombie apocalypse heading our way (Image: Getty Images)

According to the 16th century astrologer a scientist from Russia will create a biological weapon that could be very bad news for humanity.

The weapon will create a virus that will turn people into zombies – and will eventually leave us extinct.

Here’s what he said: “Few young people: half−dead to give a start. Dead through spite, he will cause the others to shine, And in an exalted place some great evils to occur

“Sad concepts will come to harm each one, Temporal dignified, the Mass to succeed. Fathers and mothers dead of infinite sorrows, Women in mourning, the pestilent she−monster: The Great One to be no more, all the world to end.”

The world will also be hit by famine, according to Nostradamus (Image: AFP via Getty Images)

As if that wasn’t enough Nostradamus also believes the earth will be hit with a famine of biblical proportions.

This another of his predictions about the end of the world, which starts with increased earthquakes and the spread of viruses – something we all know far too much about this year.

Another of the indicators, according to Nostradamus, is a massive famine, the size of which the world has never seen before.

He said: “After great trouble for humanity, a greater one is prepared, The Great Mover renews the ages: Rain, blood, milk, famine, steel, and plague, Is the heavens fire seen, a long spark running.”

Huge damage will be caused to our planet in 2021, claims Nostradamus, by huge solar storms.

Yearly horoscope claims he said: “We shall see the water rising and the earth falling under it.”

As the devastation manifests itself across the globe the doctor says there will be mass migration and people living on earth will start to fight over the few remaining natural resources.

This will also lead to war across the planet.

4. Earth will be hit by an asteroid

Nostradamus also says an asteroid could cause natural disasters in 2021 (Image: Getty Images)

Not only will the world suffer the impact of a comet, Nostradamus also say this could also cause a huge number of natural disasters.

He wrote: “In the sky, one sees fire and a long trail of sparks.”

And it seems even NASA is monitoring the skies for impact, especially as the asteroid, 2009 KF1, could possibly strike earth on May 6 next year.

After 2020 the last thing we need is another natural disaster – however, he predicts bad news if you live in California.

Nostradamus claims a huge earthquake will hit America and California is where those who interpret his work believe it will hit.

His passage reads: ““The sloping park, great calamity, Through the Lands of the West and Lombardy The fire in the ship, plague, and captivity; Mercury in Sagittarius, Saturn fading.”

6. Soldiers will have chips implanted into their brains

The rise of technology in the 21st century is something we’re all getting used to with Artificial Intelligence in most of our homes and tiny computers in our pockets.

But according to Nostradamus, this will really be ramped up in 2021 with soldiers having chips implanted into their brains.

He wrote: “The newly made one will lead the army, Almost cut off up to near the bank: Help from the Milanais elite straining, The Duke deprived of his eyes in Milan in an iron cage.”

These new super soldiers will apparently be needed to save the human race and will lead the armed forces.

Have fun with your numbers! What is the best number for a house, business or phone?

Your Monthly Horoscope for October 2020