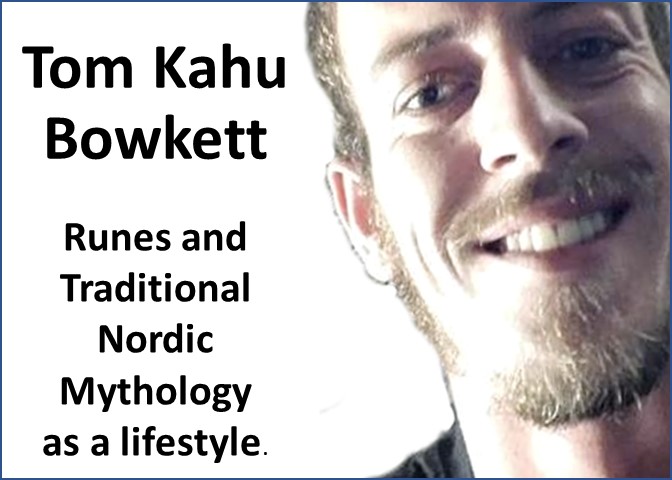 Who is Tom Bowkett?
A practicing Nordic High Heathen, following the path of his Tutonic ancestors, Tom is currently undergoing his seven (7) year apprenticeship as a Gothi ( priest) and Vitki ( runemaster), under a respected Master of an international luit ( a group of heathen spiritual leaders).
Over the past decade or so, Tom has also spent time with a Native American tribe learning under a priest and also undergone training from a recognized ‘traditional coven’ in the U.K; along with his own study of various religions and spiritual beliefs.
He has a broad span of knowledge and traditional wisdom. By drawing from this ever-growing pool of knowledge and accessing the power of the Runes and traditional magik, Tom aims to help his fellow man in working through their trials in life.
Tom and Asatru and Heathenry.
You may have heard of ‘asatru’, which is a modern eclectic; which is a religion based on mostly modern Wicca, with a slight flavour of Heathenry. Asatru WAS NOT the religion of the Vikings, but rather, it was Heathenry.
Heathenry is the ancient pagan religion practiced in Northern Europe and Scandinavia, going back to prehistoric times. Today it is a growing spiritual path around the world, with many branches and sects – some being modern creations and some being traditional.
Traditional High Heathen wisdom for today.
Using divination, ancient wisdom and magik to find the answers as done in ancient times.
If your finding this modern stuff doesn’t sit quite right with you, here is something a little different to your usual Tarot and divination cards:
Try Casting lots
Heathenry approaches situations with a balance of positive and negative (no sugar coatings here, brutal honesty!) from multiple angles looking from the past present and future. Casting lots, bones or runes, is recognized as the oldest known form of this kind of divination.