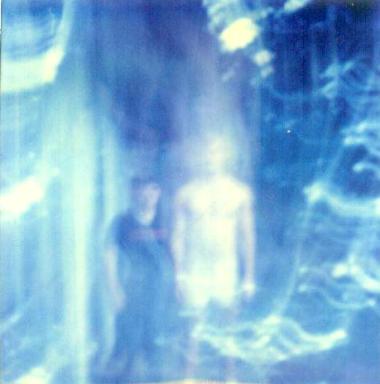 In the beginning God, or the Great Spirit, created the universe through natural process of what we call evolution and in the course of time man evolved, endowed as a spirit; that is to say man is a spirit now on this earth. That being so, every child is born with varying degrees of psychic power. We make a joke of women’s intuition, but that is an elementary form of psychic development.

There are those with exceptional powers who are known as mediums or instruments, through which those on the other side of life communicate with the people they have left behind. Some people manifest their psychic powers at an early age, some need a long period of development, while some never show any sign of such gifts at all. It is a sad thought that through ignorance of this subject many potentially valuable mediums and healers are lost to the world.

Mediums although possessing this power, are fundamentally no different from the rest of us. There is nothing supernatural about them – one cannot be above nature, but they are supernormal.

Mediumship takes two forms, mental and physical. The former is the more common. In this, spirit works through the medium’s mind and he or she is able to see, or hear clearly spirit forms or sounds. This is called clairvoyance or clairaudience. Again, a medium may only sense these things, but all mediums possess one, or combination of these three forms.

One thing must be stressed here – there is no question of fortune telling being practiced. It is true that many fortune tellers, including the gypsy who wants you to cross her hand with solver, possesses the gift of clairvoyance, but in the vast majority of cases there is nothing very spiritual about them.

How do mediums work? In the days before automation three persons were necessary in the making of a telephone call – the caller, the girl at the exchange and the person being called. No connection could be made without the operator. So it is with spirit communication. In this case the medium is the operator main contact with someone in the spirit world who wishes to communicate with a person on earth. There is however a big difference between a telephone call and spirit communication. In the former a two-way conversation can be effected, while in the latter only spirit can contact us. One of the charges levelled at us is that we call up the dead. This we cannot do. They can only come to us and then only when they are able and so wish.

In spirit communication there is a fourth link – the spirit guide or helper, who controls the medium and brings the spirit entity into contact with the person on earth. Between the medium and her helper a close harmonious partnership exists, thus providing the line of communication between the two worlds. The helper is able to enter the medium’s mind and control it so that thoughts are submitted from the spirit world, which are in turn translated by the medium into descriptions of places or people and the words of a message, through clairvoyance, clairaudience or trance.

Where do mediums work? In a church service or public meeting, in the smaller limits of a group or circle, or in the even more intimate contact between the medium and the person seeking communication or help in a private setting. Mediums also hold circles for the development of potential clairvoyants or speakers, and the larger open circle for the initial development in which those present can take part.

Another form of mediumship is psychometry in which a medium, while holding an object can obtain impressions of the person to whom it belongs, his character, habits and incidents connected with his life. There have been many instances where psychometry has been used to aid the police in finding missing persons, or bringing criminals to justice.,

The other form of mediumship is physical and demands a very high degree of psychic power which many mediums do not possess. These include direct voice-communication in which the spirit person speaks through the medium in his own recognisable voice using a ‘spirit’ larynx and materialisation, when those in spirit present themselves solid and visibly to those they wish to contact and to persons present. Often they can be touched and felt as though they were physically present. In these forms of mediumship, the medium goes into trance, that is, becomes oblivious to immediate surroundings, while generally still retaining partial consciousness.

Trance is also used in the home circle, which is a very intimate form of contact with spirit. In this a small group of sincere sitters gather around and the medium’s guide talks through the medium to those p[resent and they in turn, can ask questions and receive replies.

There is no end to the ways in which the spirit world endeavours to communicate with us through mediumship, to prove that they still live on and give us help and guidance. It is very desirable that a medium be a highly spiritual and dedicated person who recognises the great responsibilities, not only to one’s self, but to the guide and the recipients of messages from the other side, as only through the medium are these communications made possible.

You may be told that you could be a medium. It is quite possible that you could with proper development. You cannot learn to be a medium – you either are one or you are not – but you can be helped if the latent power which is in all of us can be brought to the surface.

Some would-be mediums ask if it is possible to sit alone for development. It is possible, but not advisable, as one lays ones’ self open to undesirable influences. Join a good circle run by an experienced medium and composed of sincere sitters, for mutual help and protection. Besides the will to sit, two things are essential, punctuality and regular attendance. If you cannot fulfil these conditions do not join until you are able to do so. Remember you are making an appointment with spirit and they are never late! The right attitude of mind for would-be mediums is contained in these words of Tennyson: –

“How pure in heart, how sound in head,
With what divine affection bold,
Should be the heart of him who’d hold
An hour’s communion with the dead.”

If you have not been to a Spiritualist Church, visit one at the first opportunity. There is nothing like personal experience and we will believe you will be drawn to come again and again.

Attend an open circle and see what that brings forth, then at a later stage join a development circle. It may take months, even years, but you will get there in the end.

Individuals who blame karma for their poor health have more pain and worse physical and mental health..