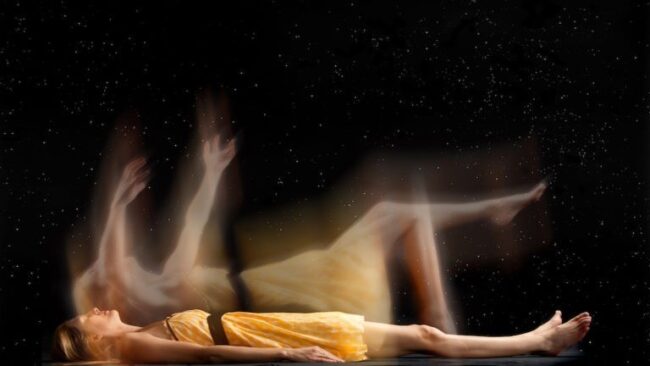 Call it what you like — dream body, astral body, energy body, Buddhist light body, Taoist diamond body, Egyptian ka, Tantric subtle body, Hindu body of bliss — and in Christianity, the experience of different “heavens,” i.e. “I know a man who was caught up to the third heaven. Whether it was in our out of body, I do not know,” from Corinthians 12:1-4. The subtle body is a universal human experience, and apparently part of our standard human design like toenails and kidneys. It is this subtle body that projects astrally and is active during unconscious and lucid dreaming; astral projection and dreaming often go hand-in-hand as “out-of-body” experiences, or OBEs.

The subtle body, when cultivated, can survive the physical body as a matrix for consciousness, and astral projection and lucid dreaming are part of spiritual training paths for subtle body cultivation. Neophytes confuse the subtle body with the soul or spirit, two additional aspects of multi-dimensional humans.

Out of Body Experiences and Astral Projection

The OBE can be intentional or involuntary, as with near-death events when people report finding themselves floating near the ceiling of their hospital rooms, perhaps observing medical staff attempting to revive them. Trauma, illness, or water and food deprivation, as with Native American vision quests, can trigger OBEs. Lucid dream states are opportunities for intentional OBEs. For the purposes of this article, OBEs may be spontaneous, and astral projection a conscious choice, though some would argue otherwise.

Essentially, the OBE begins with an experience of leaving the body and consciously observing it from a detached perspective. With practice and lucidity, awareness can be directed to locations or activities like flight. Yes, flight. If you’ve had flying dreams — literal flying, no 747 required — or being in the sky, you’ve had OBEs. Some say that we have regular OBEs during sleep, often hovering a few inches over our physical bodies.

Neuroscientists are puzzled — while the experience is no longer dismissed out of hand by medical professionals, science holds the view that OBEs involve neurological or brain dysfunction. After his own experience, Dr. Raymond Moody MD became interested in near death OBEs, and for decades interviewed hundreds of experiencers and collected data, defining common qualities of OBEs. Moody identified nine common elements of a near-death OBE — some experiencing all, some, only two or three.

The tantrics mastered lucid OBE and dream states to overcome the fear of death by learning that we are not our “bodies.” They also discovered that the physical body can experience deep healing during OBEs — the mind can be tough on the body. And rather than losing time to practice meditation during sleep, yogis continued working through the night while the body rested.

Some athletes learn lucid dreaming to practice and visualize their game. By working in a dream or out-of-body, not only do they visualize, they have a “felt sense” of their practice, and can actually acquire the muscle memory for winning habits. Others benefit from the opportunity to explore past lives as well as accelerated personal development.

It is our energy, or subtle body that comes and goes from our physical form.

There are dozens of methods to learn conscious OBE and astral projection. There are two approaches — one is to keep the mind awake while the body falls asleep. It’s tricky — the mind wants to do what the body is doing. The goal is to take the body into deeper and deeper states of relaxation without drifting into unconsciousness. Yoga Nidra is one method. Once the body enters sleep state, practitioners simply “roll” out of their physical form.

Ancient yogis would tie two frogs together before sleep. Once tied, the frogs would continuously croak— a yogi would use the sound to anchor awareness as the body drifted into sleep, and either leave the body, or enter lucid dream states. If, during a dream, the yogi could no longer hear the frogs, he/she knew lucidity had been lost, and could “wake” again within the dream.

Bob Monroe, founder of the leading research organization in the field of human consciousness called The Monroe Institute, penned a body of work titled “Journeys Out of the Body” in 1971 in which he provides a detailed outline for how to astrally project one’s self in seven steps:

From the work of Robert Bruce, founder of the  Astral Dynamics movement, the rope technique is regarded one of the most accessible astral projection methods.

Step 1: Relax the physical body by visualizing each muscle.
Step 2: From your space of relaxation, enter a vibrational states; this should feel like an amplified version of a cell phone’s vibration mode pulsations coursing through the body.
Step 3: Imagine a rope hanging above you.
Step 4: Using the astral, or subtle, body, attempt to hold on to the rope with both hands. The physical body remains completely relaxed.
Step 5: Begin to climb the rope, hand over hand, all the while visualizing reaching the ceiling above you.
Step 6: Once you are aware of your full exit of the physical body, you are able to explore the astral plane.

Again, there are numerous lucid dreaming techniques. Some are designed to train the sleeper to wake within the dream, others offer methods of staying lucid while letting the body fall asleep.

Yes, it’s sounds weird. Nicotine has specific actions on brain chemistry — but no, it’s not about smoking. Considered a cognitive enhancer, nicotine is gaining fans among biochemical brain hackers.

Many, using nicotine patches to quit smoking, have inadvertently discovered what happens when they forget to remove a patch before sleep. Nicotine can induce hyper-realistic, but bizarre dreams that are so outrageous that many simply say to themselves, “Omg. This MUST be a dream. It’s too nuts to be anything else.” And voila — lucidity is attained. This is not an endorsement of the method, as many report nightmares when using nicotine.

Lucid Dreaming With Habit and Repetition

We attain lucidity the instant we recognize we’re in a dream state. Some people train by asking themselves, several times a day for days or weeks, “is this a dream?” The question eventually gets stuck in the place songs and jingles get stuck and are hard to unstick — things like “Afternoon Delight” by the Starlight Vocal Band. You know what we’re talking about.

The premise is that the question begins to habitually repeat by itself, and that eventually the mind will ask during a dream. When the dreamer answers, “why yes, this IS a dream!” they achieve lucidity.

The best opportunities for becoming lucid within a dream are during REM (rapid eye movement) sleep. This stage happens in the first two hours after we fall asleep and before we wake up. By waking and going back to sleep during the night we increase REM sleep time. Some use the sleep/wake method by setting interval alarms during the night, getting up for a few minutes, and going back to sleep with an intention of keeping the mind awake. If awakened during a dream, immediately go back to sleep — if possible, re-enter the dream with lucidity.

Listening to yoga music at bedtime is good for the heart