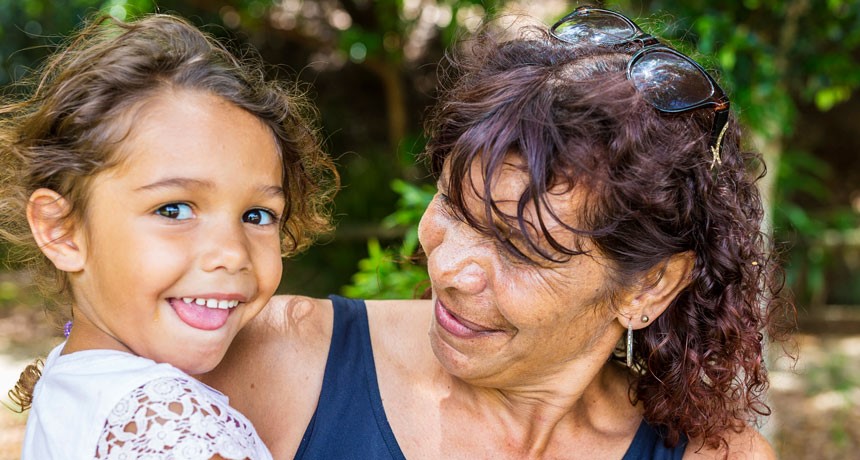 Grandmothers are great — generally speaking. But evolutionarily speaking, it’s puzzling why women past their reproductive years live so long.

Grandma’s age and how close she lives to her grandchildren can affect those children’s survival, suggest two new studies published February 7 in Current Biology.  One found that, among Finnish families in the 1700s–1800s, the survival rate of young grandchildren increased 30 percent when their maternal grandmothers lived nearby and were 50 to 75 years old.  The second study looked at whether that benefit to survival persists even when grandma lives far away. (Spoiler: It doesn’t.)

The studies are part of a broader effort to explain the existence of menopause, a rarity in the animal kingdom. The so-called “grandmother hypothesis” stipulates that, from an evolution standpoint, women’s longevity is due to their contributions to their grandkids’ survival, thus extending their own lineage (SN: 3/20/04, p. 188).

In the Finnish study, researchers wanted to know if grandmas eventually age out of that beneficial role. The team used records collected on the country’s churchgoers born from 1731 to 1895, including 5,815 children. Women at that time had large families, averaging almost six children, with about a third of kids dying before age 5.

“We said it as a joke when we had the idea for this study. ‘Oh killer grandmothers, wouldn’t that be such a great story?’ ” recalls Simon Chapman, an evolutionary biologist at the University of Turku in Finland. “Then we found it.”

Because paternal grandmothers typically lived with their sons’ families, David Coall, a biological anthropologist at Edith Cowan University in Joondalup, Australia, suspects parents found themselves crunched between the competing needs of ailing grandmothers and wailing babies. “What we are likely seeing here is a historical version of the sandwich generation,” says Coall who was not involved in the study.

In the second study, researchers wanted to know if the grandmother boost persisted even when families lived far apart. The team used data from 1608 to 1799, encompassing 3,382 maternal grandmothers and 56,767 grandchildren in Canada’s St. Lawrence Valley. As with the Finnish population, those early French settlers had large families and high child mortality, but they also moved around a lot.

Mathematically speaking, as grandma moved farther away, those survival and reproduction rates began to resemble those of the younger sisters with deceased moms. Once a maternal grandmother moved 350 kilometers away or more, her benefits ceased, says study coauthor Patrick Bergeron, an evolutionary biologist at Bishop’s University in Sherbrooke, Canada.

These findings may explain an evolutionary reason for menopause, but may not hold true in today’s modern world, where people tend to have less kids and live farther from home. What would be interesting, says Chapman, is to look at whether or not the presence of grandma alleviates the sort of mental health problems plaguing children today.

Both studies provide an interesting peek at life in these North American and European communities, says Melissa Melby, a medical anthropologist at the University of Delaware in Newark. But she remains skeptical about the grandmother hypothesis because menopause may well have come about by accident. Maybe, she says, women live past their reproductive years because evolution favored men who could reproduce into old age, who then passed on those longevity genes to their sons and daughters.

Melby notes that in the study out of Canada, women continued having babies until age 40 or so. So maybe those grandmothers survived because they were still rearing their own children. Post-reproductive life is often defined as starting at menopause, she says. “But it’s not just about getting the baby out. You need to raise that baby.”

Do all people experience similar near-death-experiences?