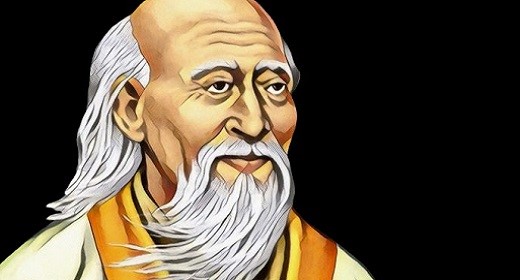 He is best known as the author of the Tao-Te-Ching, the work which exemplifies his thought. The name by which he is known is not a personal name but an honorific title meaning `Old Man’ or `Old Teacher’ and there has been countless speculation as to whether an individual by that name ever existed or whether Lao-Tzu is an amalgam of many different philosophers. The historian Durant writes, “Lao-Tze, greatest of the pre-Confucian philosophers, was wiser than Teng Shih; he knew the wisdom of silence, and lived, we may be sure, to a ripe old age – though we are not sure that he lived at all” (652). If he did exist, he is thought to have lived in the 6th century BCE.

A story told by the historian Szuma Ch’ien (also known as Sima Qian, 145/35-86 BCE) relates how a young Confucius went to visit Lao-Tzu to ask him a question regarding history. Lao-Tzu is said to have responded:

Those about whom you inquire have moulded with their bones into dust. Nothing but their words remain. When the hour of the great man has struck he rises to leadership; but before his time has come he is hampered in all that he attempts. I have heard that the successful merchant carefully conceals his wealth, and acts as though he had nothing – that the great man, though abounding in achievements, is simple in his manners and appearance. Get rid of your pride and your many ambitions, your affectation and your extravagant aims. Your character gains nothing for all these. This is my advice to you.

According to Szuma’s narrative, Confucius was so impressed by the old master that he could only compare him to a great, mythical dragon and took his advice to heart, concentrating more on his inner wealth than outward displays of affluence and dedicating himself to philosophy. The story is considered fictional but exemplifies the high esteem with which Lao-Tzu was accorded, whether an actual or fictional figure, in that he is shown to have influenced the greatest of the philosophers of China.

ACCORDING TO SZUMA’S NARRATIVE, CONFUCIUS WAS SO IMPRESSED BY THE OLD MASTER THAT HE COULD ONLY COMPARE HIM TO A GREAT, MYTHICAL DRAGON.

Szuma Ch’ien is the main source for our knowledge about Lao-Tzu. According to his account, Lao-Tzu was the curator of the Royal Library of Chou and, disgusted by the ineptitude and cruelty of the politicians of the time, and the endless suffering of the people, resolved to leave China completely and find a place of peace and solitude. On his way through the western pass of the frontier, he encountered the gate-keeper, Yin Hsi, who said to him, “So you are going into retirement. I beg you to write a book for me.” Lao-Tzu promptly sat down, wrote the Tao-Te-Ching, handed it to Yin Hsi, and walked on through the pass, disappearing into the mists. Although there are no accounts of his life after this event, it is claimed that he lived to the age of 87 and died peacefully.

The Tao-Te-Ching (Book of the Way) is an anti-intellectual, anti-authoritarian treatise which posits that the way of virtue lies in simplicity and a recognition of a natural, universal force known as the Tao. Lao-Tzu writes, “When we renounce learning we have no troubles…The ancients who showed their skill in practising the Tao did so not to enlighten people, but to make them simple and ignorant.” By `ignorant’ Lao-Tzu did not mean uninformed but, rather, purposefully focused on the present rather than accumulating knowledge which leads to idle speculation and complications in one’s own life and in the larger community. Lao-Tzu’s Taoism stood in direct contradiction to Confucius’ philosophy emphasizing education, knowledge as power, and strict adherence to the law. Lao-Tzu’s claim that “the more laws one makes, the more criminals one creates” is the antithesis of Confucius’s assertion that more laws make better citizens. Regarding Lao-Tzu’s claims, Durant writes,

The intellectual man is a danger to the state because he thinks in terms of regulations and laws; he wishes to construct a society like geometry, and does not realize that such regulation destroys the living freedom and vigor of the parts. The simpler man, who knows from his own experience the pleasure and efficacy of work, conceived and carried out in liberty, is less of a peril when he is in power, for he does not have to be told that a law is a dangerous thing, and may injure more than it may help. Such a ruler regulates men as little as possible. (654)

These two opposing philosophies would inform all of Chinese society with Confucianism becoming the official philosophy of the government and Taoism the most popular belief among the peasant classes (though, certainly, all classes observed important elements of both beliefs). The religion of Taoism, which advocated adherence to the universal Tao long before the Tao-Te-Ching, was practised through ancestor worship and an acknowledgement of the natural law of the Tao in all things. Confucianism, which refused to speculate on universal unknowns, served as a practical guide to living well through emphasis on law and proper behaviour.  Lao-Tzu’s writings clarified and codified an underlying philosophy to the belief in a universal force while condemning the laws which attempted to regulate that force in the lives of human beings.

According to Taoism, all human beings are naturally good but are corrupted by law and an incorrect belief in how they are supposed to behave in society. By regulating people’s behaviour through law, government only makes them behave badly because it creates an artificial environment which human beings rebel against in an effort to maintain their natural state of harmony. If one observes the Tao, and submits to the natural flow of energy in the universe, one will be at peace. Resistance to the Tao is exemplified through the creation of laws which keep people from behaving in accordance with their natures which, if left unregulated and unrestricted, would tend toward goodness and peace. Lao-Tzu maintained, as did Teng Shih (his contemporary or elder), that people behaved badly because they were forced to through poor government and unjust laws.

Recognizing that human beings act out of self-interest, Lao-Tzu still felt that, if left alone, they would harmonize whatever disputes arose through adherence to the natural rhythm of the universe. He wrote,

This path of passive influence is most clearly articulated in one of the most famous passages of the Tao-Te-Ching: “Yield and overcome, Empty and become full, Bend and become straight.” These lines, and the philosophy they express, have been cited by many schools of anti-authoritarian thought, advocating peaceful resolution to conflict, for centuries. “Quiescence, a kind of philosophical inaction, a refusal to interfere with the natural courses of things, is the mark of the wise man in every field. If the state is in disorder [Lao Tzu claims], the proper thing to do is not to reform it, but to make one’s life an orderly performance of duty” (Durant, 656). This performance of duty had chiefly to do with reflection and attention to the natural courses of life within, and outside of, oneself and, imitating the enlightened self-interest Lao-Tzu recognized in nature, an awareness that the good of the individual leads to the good of the community and that the best society, then, operates on natural, not man-made, laws.

Tips for Choosing a Tarot Deck – A Guide for Beginners

I Ching Wisdom Oracle For The Whole World

If You Say Yes to Any of These 7 Questions, You’re Much Happier Than You Think