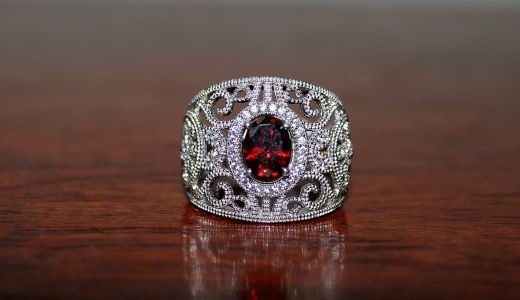 The January gemstone is the garnet. The garnet birthstone’s meaning is both about the person born in January, and how the garnet gemstone can be used to bring good fortune.

Though it is commonly red, the January stone is actually not one stone with one single colour, but many different colours, categorised as one because they consist of the same minerals. The deep red garnet is called pyrope but the stone can range in colour all the way to green, which are called tsavorites.

The deep red January birthstone colour gave the mineral stone group its name because it was thought to resemble a pomegranate seed. Garnet is derived from the word ‘granatum’, meaning seed, and, when a group of red garnets were together, they resembled these seeds. There are actually 33 different garnet stones, in every colour apart from blue. The January birthstone colour is therefore diverse but each is deep in strong colours, just like the people born within its month.

Being born with the garnet birthstone is good for friendships. Truth and honesty are inherent in your character, which means you are always blunt and straightforward if friends come to you in a crisis. You love deeply but you don’t always have to say it, instead showing it through your genuine actions and grace.

The people around those with the January stone know them as trustworthy, which greatly enhances friendships. You tend to attract people who will stick around and you are faithful, loyal and loving, contributing to consistent bonds with the people you love, ones that even last throughout your life. Your fidelity, sincerity, and grace make you a positive influence on the people around you. Without knowing it, people born with the January gemstone help their friends become better people, because of their love and positive, unconditionally-loving character.

In a relationship, you are morally upstanding, unconditionally loyal, faithful and trustworthy. This often attracts equally moral people, looking for something clear not confused, and you expect the same loyal qualities from a partner. But you love deeply and trustingly, and often do not have a guard up. If you do find yourself hurt in a relationship, you know the right thing to do because of the morals you hold dear. Because of your strength and confidence too, you have the strength to leave, even a person you truly let yourself love.

The garnet stone meaning is thought to provide directional guidance when worn, which is why it is associated with safe travel. Many people with the January birthstone are passionate about travel, so this lucky aspect of the garnet stone is one of its key qualities. Of course, it is important to know where you are, location-wise, and not wander into dangerous areas while travelling in unfamiliar places, but travel safety encompasses more than just location. Staying aware of scams and being wary of your vulnerability and safety navigating a new culture are all parts of safe travel, and wearing a garnet stone can help you through these difficult situations.

The Jan birthstone has had popularity throughout many histories. The pharaohs of ancient Egypt wore necklaces with garnets, commonly using them as inlay stones to match the jewellery they wore. Garnets featured in the signet rings of ancient Rome used to stamp wax to secure documents. One of the most famous garnet pieces is the antique pyrope hair comb, fashioned in the Victorian era. The name for the red ‘pyrope’ garnet gemstone comes from Greek ‘pyrōpos’ meaning ‘fiery-eyed’.

In the middle ages, garnets were also popular, with certain beliefs held about them. They were understood to protect from poison, so they would be dropped into a drink by royals to ensure the beverage was not poisoned. Another belief was that if you dreamt of losing a garnet necklace, you would experience good fortune in your future, as this was a lucky symbol. Bullets in Asia were once made from garnets because it was believed enemies would bleed more when shot with one. The garnet gemstone is also believed to be the stone of the biblical figure Gabriel.

There are many aspects which determine the answer to the question ‘what is January’s birthstone?’. The garnet birthstone meaning encompasses the good fortune wearing one can bring but also tells us something about the personalities of those born in January. The Jan birthstone is the garnet gemstone but not always the classic red garnet which comes to mind. Garnet is a versatile stone which can be any colour apart from blue. Its diversity reflects the interesting personality of those born in January, who are confident, strong and love deeply.

3 African Proverbs to Live By

Are psychics born or made?