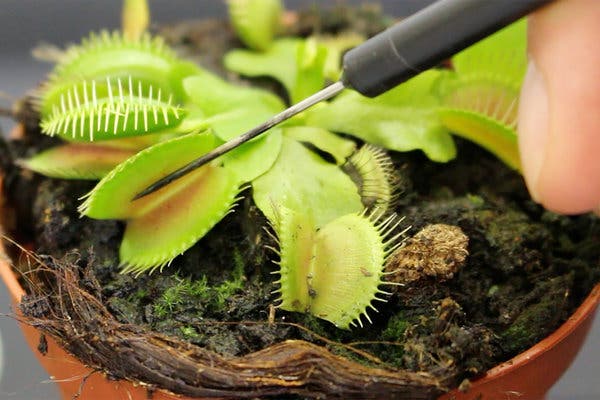 A recent paper in Trends in Plant Science assures us that plants are not conscious. But why do some scientists insist that they are?
There are two reasons. First, we’ve discovered many remarkable things recently about how plants communicate. Plants have systems that function like nervous systems. Seeking to thrive and grow, they communicate extensively with each other and with insects, without a mind or a brain.
These discoveries have led to “plant neurobiologists” to claim that “plants possess many of the same mental features as animals, such as consciousness, cognition, intentionality, emotions, and the ability to feel pain.”
Of course, media love plant neurobiology, which got started in 2006. See, for example, “The Intelligent Plant” (Michael Pollen, New Yorker, 2013) and “A Mind Without a Brain: The Science Of Plant Intelligence Takes Root” (Andrea Morris, Forbes:, 2018).
All of which leads to the delicate question, Is salad murder?
But wait!, a reader somewhere may be thinking: “Some tree out there is not conscious in the sense that I am conscious and that my dog Rosie is. Get a life!”
Indeed. As their critics have pointed out, plant intelligence defenders confound “intelligence” and “consciousness.” There are at least 70 definitions of intelligence, into one or another of which plants may be fitted. But consciousness, which really matters, remains the Hard Problem. When our reader tells Rosie that she is a good dog! she basks in the compliment. Would a tree experience approval, communicated in any form?
Quite simply, the need to see humans as equivalent to animals has now spread to the need to see us as equivalent to plants. Critics were aghast at an interview that a plant neurobiologist Monica Gagliano offered to Forbes in 2018:
“My work is not about metaphors at all,” says Monica Gagliano. “When I talk about learning, I mean learning. When I talk about memory, I mean memory.” Gagliano, an evolutionary ecologist, is talking about plants…
“A brain is a blobby mass of electrochemical impulses and there are all of these other cells which are very specialized at their job. They transfer chemicals and, in particular, electrical signals and that’s how the information goes through the body. So in that sense, we shouldn’t focus so much on saying ‘it’s the brain doing things, it’s the nervous system doing things,’ but actually look at the functional aspect of the story. For example, plants are amazing electrical beings and all life really is electrical as well. So again, there are commonalities that if you bring it to a deeper layer, you can see we do it with electricity, plants do it with electricity, animals do it with electricity, bacteria do it with electricity. So basically electricity might be one of the things that we should look at if we want to understand something more about the essence of life.”

The critics are not willing to merge with the undifferentiated and universal buzz:
From this risibly oversimplified picture of the brain, the naïve reader could be forgiven for inferring that the brain, the seat of consciousness in animals, is no more complex than a sponge, the only multicellular animal lacking neurons. But it serves the author’s rhetorical purpose, for by neglecting the brain’s amazing complexity, which is the very essence of brain function, she makes the existence of consciousness in plants seem much more plausible than it really is.

But then things go downhill, at least for these defenders of a sane approach to the world of plants. They insist that we are zeroing in on the origin of consciousness, based on a recent study purporting to have discovered a Darwinian path:

Here, we outline a new hypothesis proposed by Feinberg and Mallat for the evolution of consciousness in animals. Based on a survey of the brain anatomy, functional complexity, and behaviors of a broad spectrum of animals, criteria were established for the emergence of consciousness. The only animals that satisfied these criteria were the vertebrates (including fish), arthropods (e.g., insects, crabs), and cephalopods (e.g., octopuses, squids). In light of Feinberg and Mallat’s analysis, we consider the likelihood that plants, with their relative organizational simplicity and lack of neurons and brains, have consciousness to be effectively nil.

The proposed path won’t get us where we need to go. For one thing, the types of life forms listed as satisfying the criteria have already been identified elsewhere as featuring some unusually intelligent species. But that says nothing one way or the other about consciousness (a sense of self). A criterion that added (or subtracted) species using a robust criterion would offer more to work with.

But the critics needn’t have gone there anyway. We can continue to regard consciousness as a hard problem while maintaining that, on the evidence, plants don’t show it. Philosopher Thomas Nagel sparked some serious thinking merely by asking “What is it like to be a bat?” We instinctively sense that there is something that it is like to be a bat, even if we don’t understand it. No one asks what it “is like” to be a dandelion.
As it happens, the researchers who want us to see that plants are not conscious do not appear to want to discuss the underlying problem that human consciousness is entirely unique, involving reason and free will. It is the “Hard” in the Hard Problem of consciousness. If critics don’t focus more on that, their efforts to clarify differences between consciousness, intelligence, and communication will likely flounder.

We can expect many more such conundrums. They will result in further declarations in science journals that sound, on the surface, strange. For one thing, some philosophers of physics make the case that if you are conscious, in a material world, your coffee mug must be too. Never mind whether salad is murder, is breaking a coffee cup the irretrievable loss of a fragile consciousness in a wholly material world?

There is an intellectual price to be paid for insisting that humans, bats, and dandelions are all just life forms on a continuum. The intellect is, in fact, that price.

plants are not conscious. But why do some scientists insist that they are?

Things that You Need to Know About Sublingual Vitamins

Curious Kids: why do some people worry more than others?