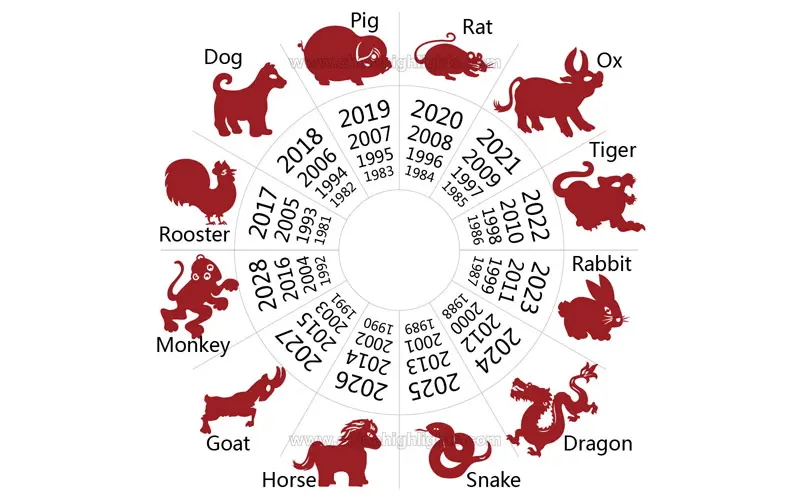 Learn about the animals that inspired the Chinese zodiac signs.

Happy Year of the Tiger!

In many places, January 1 is “day one” of the new year, based on a calendar that follows the Earth’s movement around the sun. But the lunar calendar—upon which the Chinese New Year is based—tracks time by the moon cycles. That’s why people all over the world celebrate Chinese New Year on different days each year; this year the calendar starts on February 1.

According to the Chinese calendar, the year you were born might determine your personality. That’s because each year is represented by an animal, called a Chinese zodiac sign, and legend has it that people born under that sign have similar traits to the animal. (The year 2022—starting February 1—is the Year of the Tiger.)

These ancient zodiac signs probably weren’t based on real animal species. “For most of them, except the dragon, we refer to the animals in a more general sense,” says linguistics professor Zhichang Xu of Monash University in Australia, who is also an expert on Chinese culture. “These are pretty much characters rather than ‘animals.’”

Real Tiger Behavior: Bengal tigers live solitary lives in Indian forests. Female tigers care for their young for two to three years before sending the cubs off to live on their own. These tigers are fierce, but they patiently stalk prey such as wild pigs and deer before attacking.

Are you like a Bengal tiger? You like your independence and always try to do things yourself before asking for help. If you fail, you just try again. You love hanging out with your friends at school but also are just fine relaxing by yourself at home.

Real Rabbit Behavior: Unlike most rabbits, the Amami rabbit has calls and vocalizations to communicate with other Amamis. Burrowing in the forests of Japan, this cautious rabbit is active mostly at night; in fact, moms check on their babies only once a day to feed them. And this rabbit isn’t a fighter—it prefers to hop away or freeze when threatened.

Are you like a Amami rabbit? You prefer to figure out things on your own but always think about the best way to say things before speaking. You don’t like picking fights but prefer to chew on the best way to solve a problem before people become upset.

Real Dragon Behavior: OK, dragons aren’t real. So let’s look at the Draco lizard—nicknamed the flying dragon—instead. Living in the tropical rainforests of Southeast Asia, these eight-inch-long lizards guard the trees that they call home by flapping their “wings”—actually folds of skin attached from their arms to their rib cage—to scare off predators like snakes or birrds. The wings also help them glide from tree to tree, up to 30 feet in the air.

Are you like a Draco lizard? You’re brave and stand up for your family—even if you have to fake it sometimes. You’re not afraid to take a chance to get what you want, even if that means leaping before you look.

Real Snake Behavior: Slithering through places like Hong Kong and Taiwan, Chinese cobras use their super senses of sight and smell to figure out exactly where their prey is so they can accurately strike on the first attack. But their venom isn’t just for catching dinner—they also spit and strike to defend themselves from any potential predator (including humans). At least they’ll give a warning first: When threatened, the cobra will lift the top half of its body, inflate its hood around its neck, and hiss.

Are you like a Chinese cobra? You’re extremely thoughtful when faced with a problem to solve and usually mean what you say. A smart talker, you always have the facts to defend your what you think—and rarely back down.

Real Horse Behavior: Found in Mongolia, Przewalski’s horses are known as takhi, which means “spirit.” Why? It’s the only horse species that hasn’t been domesticated, most likely because its keen sense of sight and smell quickly alerts it to humans and allows it to escape capture. These horses stay with their family groups until they’re adults, when they can join another group of horses if they want.

Are you like a Przewalski’s horse? You’re free-spirited and energetic, and nothing stops you when you have a goal in mind. You get along with all types of people and are independent-minded—you don’t really care what folks think about your choices.

Real Ram Behavior: Found in western Asia, the wild goat is a curious animal that prefers to hide in its mountain habitat rather than lock horns like mountain goats. Its flexible hooves help it grip rocks and trees as it climbs.

Are you like a wild goat? Your easy-going nature allows you to get along with most people; when conflict comes up, you’re the one people turn to for peaceful solutions. You’re curious about lots of things—from science to animals to food.

Real Monkey Behavior: Found in east central China, Tibetan macaques are experts in staying hidden—humans rarely see them in the wild. But if you surprise one … watch out! When outsiders enter their territory, they’re not afraid to fight. But they’re quite friendly within their own family groups, as well as with other macaque families living nearby. Both males and females take care of their babies; they even have a behavior called bridging, when the mom and dad hold the baby together and chatter their teeth.

Are you like a Tibetan macaque? You love family traditions like weekly dinners or weird holiday rituals, and you can’t get enough of hanging out with your siblings or faraway cousins. Working together to complete a project—whether it’s a testing a science experiment or planning a surprise party—is how you like to get things done.

Real Rooster Behavior: Related to the pheasant, the red junglefowl lives in the jungles of India and is likely the direct ancestor to the domesticated chicken. Pecking order—also called social hierarchy—is extremely important to this species. Chicks even learn it within a week after they hatch!

Are you like a red junglefowl? You really love your schedules and rarely change your plans once they’ve been made. You always strive to succeed in everything you do and have a step-by-step plan to get to the top.

Real Dog Behavior: The chow chow is one of the oldest dog breeds in the world, dating back to 206 B.C. when they were companions to Chinese royalty. Like many dogs, these pups are loving and devoted to family but also very independent. Chow chows like to keep clean and have a finer attention to detail than other breeds.

Are you like a chow chow? You’re loyal to friends and family and love to snuggle, but it may take some time for you to warm up to new situations. No matter what the task, you pay close attention to make sure everything gets done correctly, whether it’s a science project, cooking Sunday breakfast, or planning a surprise party for your BFF.

Real Pig Behavior: Found all over the world, including Thailand and Malaysia, wild boars are thought to be extremely intelligent, with memories that keep them from repeating dangerous mistakes. Although related females and their young live in groups, adult males usually hang out by themselves. And though most hoofed animals—like horses and cows—will have their babies near the group, wild female boars will temporarily leave their groups to have their piglets. These crafty critters aren’t picky eaters and will munch on whatever they can find, such as roots, seeds, and even small mammals.

Are you like a wild boar? You remember past events well and learn quickly from your mistakes. You enjoy being with a small group of friends or family and are great at coming up with solutions when challenges arise.

Real Rat Behavior: Also known as the Asian house rat, the Tanezumi rat can live in both indoor and outdoor environments in countries like India and Myanmar. It’s also not a picky eater, burrowing under fields to munch on rice and coconut crops and moving into homes during cold weather to snack on whatever they can find. These solitary rodents are most active at night.

Are you like an Asian house rat? Not much stops you from getting what you want. You see roadblocks as opportunities, and you have tons of creativity that keeps you from getting bored. Your quick thinking helps you overcome sudden shake-ups in your routine.

What is Tantra Yoga Really About?

A Guide to Mediums and their Skills